As Wuhan lockdown ends, masked crowds fill the streets of that city

WUHAN, China — After more than two months indoors, Wuhan resident Tong Zhengkun was one of millions of people enjoying a renewed sense of freedom when the Chinese city’s 76-day coronavirus lockdown was lifted Wednesday.

“I haven’t been outside for more than 70 days,” an emotional Tong said as he watched a celebratory light display from a bridge across the broad Yangtze River flowing through the city, where the coronavirus outbreak started late last year. “Being indoors for so long drove me crazy.” 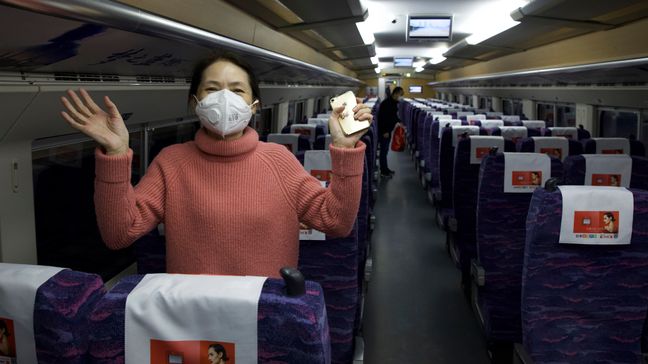 A passenger wearing a face mask to protect against the spread of new coronavirus talks about how happy she is to leave her 76-day stay in lockdown in Wuhan as she boards the first high-speed train to leave Hankou train station after the resumption of train services in Wuhan in central China’s Hubei Province, Wednesday, April 8, 2020. (AP Photo/Ng Han Guan)

Later in the day, Wang Chun took to a downtown street to film a mask-free dance routine with a friend for posting on the internet

“I’ve been inside for 2 1/2 months. I’m so happy Wuhan has defeated the virus,” Wang said after again donning her mask.

Like so many others in the city, Wang was still waiting to hear about when she would get back to work.

“That’s a very good question,” she said with a laugh. 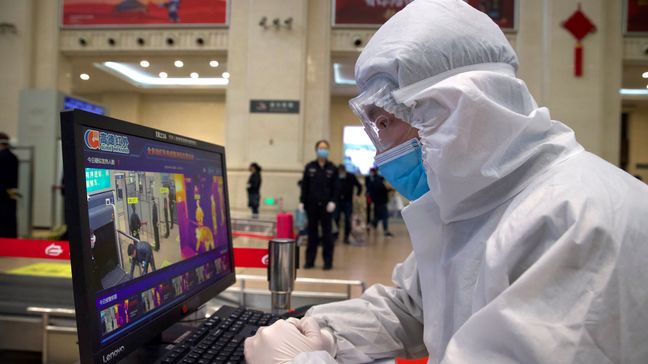 A worker in a protective suit monitors a temperature scanner at Hankou train station after of the resumption of train services in Wuhan in central China’s Hubei Province, Wednesday, April 8, 2020. (AP Photo/Ng Han Guan)

Streets in the city of 11 million people were clogged with traffic and masked pedestrians visited the few snack shops that had reopened in the nightlife area. Long lines formed at the airport and train and bus stations as thousands streamed out of the city to return to their homes and jobs elsewhere. Yellow barriers that had blocked off some streets were gone, although the gates to residential compounds remained guarded.

Tong said his apartment complex was shut down after residents were found to have contracted the coronavirus. Neighborhood workers delivered groceries to his door.

Such measures won’t be entirely abandoned following the end of Wuhan’s closure, which began on Jan. 23 as the virus was raging through the city and overwhelming hospitals. Schools are still closed, temperatures are checked when people enter buildings and masks are strongly encouraged. City leaders say they want to simultaneously bring back social and commercial life while avoiding a second wave of infections.

The ability to travel again is a huge relief, however, and around 65,000 people were expected to depart Wednesday by plane and train. Wuhan residents are now permitted to leave without special authorization as long as a mandatory smartphone application powered by a mix of data-tracking and government surveillance shows they are healthy and have not been in recent contact with anyone confirmed to have the virus. 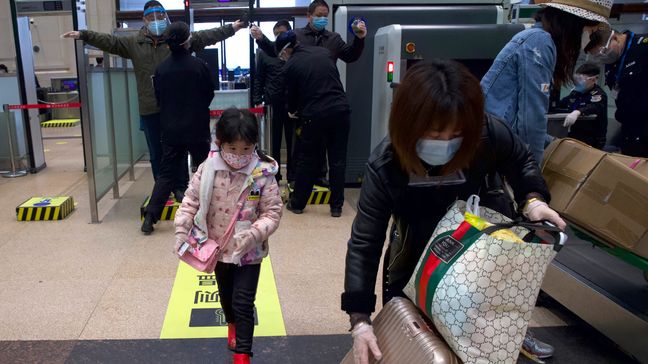 Passengers wearing face masks to protect against the spread of new coronavirus pass through security checks at Hankou train station after of the resumption of train services in Wuhan in central China’s Hubei Province, Wednesday, April 8, 2020. (AP Photo/Ng Han Guan)

It didn’t take long for traffic to begin moving swiftly through the reopened bridges, tunnels and highway toll booths. Nearly 1,000 vehicles went through a busy highway toll booth at Wuhan’s border between midnight — when barricades were lifted — and 7 a.m., according to Yan Xiangsheng, a district police chief.

According to airport official Lou Guowei, the first departing flight left Wuhan Tianhe International Airport at 7:25 a.m. for Sanya, a coastal city in Hainan province known for its beaches.

“The crew will wear goggles, masks, and gloves throughout the flight,” chief flight attendant Guo Binxue was quoted as saying by China’s official Xinhua News Agency. “It will be very smooth because we have made much preparation for this flight.”

Xiao Yonghong had found herself stuck in Wuhan after returning to her hometown on Jan. 17 to spend the Lunar New Year with her husband, son and parents-in-law. 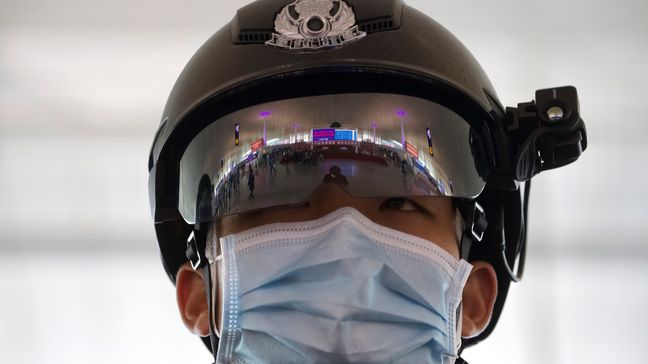 “We were too excited to fall asleep last night. I was looking forward to the lockdown lift very much. I set up an alert to remind myself. I was very happy,” said Xiao, who was waiting for her train outside Hankou station with her son and husband, all three of them wearing masks and gloves.

At the airport, Chen Yating took personal protection a step further, wearing white coveralls, gloves, a mask and a baseball cap. She was waiting to catch a flight to the southern Chinese business hub of Guangzhou.

“We are living in a good era,” Chen said. “It is not easy to have today’s achievement.”

The end of Wuhan’s lockdown came one day after Japan declared a state of emergency for Tokyo, Osaka and five other prefectures in an effort to stem the virus’s spread. India and much of Europe and the U.S. have also ordered stay-at-home orders, although not nearly to the same extreme as Wuhan.

Restrictions in the city where most of China’s more than 82,000 virus cases and over 3,300 deaths from COVID-19 were reported have been gradually eased as cases declined. The government reported no new cases in the city on Wednesday April 8th.

While there are questions about the veracity of China’s count, the unprecedented lockdown of Wuhan and Hubei province, where the city is located, have been successful enough that other countries adopted similar measures.