Trump suggests that doctors and nurses are thieves

UNITED STATES (The Guardian) – US president Donald Trump’s comments suggesting that “people” may be stealing masks from hospitals sparked an angry backlash among the US population including people from his base. Due to these unfortunate comments he made, nurses, doctors and first responders felt he accused them of theft in response to urgent calls for more personal protective equipment (PPE)

The Trump 2020 campaign also joined in the accusation.

State officials across the United States are reporting a shortage of PPE such as masks for medical workers as they deal with the snowballing coronavirus pandemic. New York, one of the worst-affected states, is feeling the shortage particularly acutely.

Medical workers are having to reuse old masks rather than dispose of them because of the shortage as they deal with growing numbers of infected patients. They are pleading with the federal government to help in their search for more PPE supplies.

Referring to an unnamed hospital in New York, Trump said a supplier has delivered 10-20,000 masks “for years” but now the demand has increased to 300,000.

“How do you go from 10-to-20-to-300,000…even though this is different. Something’s going on…Where are the masks going? Are they going out the back door?” Trump said at a White House press conference on Sunday.

The president later added: “I want the people in New York to check—Governor Cuomo, Mayor de Blasio—that when a hospital that’s getting 10,000 masks goes to 300,000 masks during the same period, people should check that because there’s something going on… I don’t think it’s hoarding, I think it’s maybe worse than hoarding, but check it out. Check it out. I don’t know, I don’t know. I think that’s for other people to figure out.” 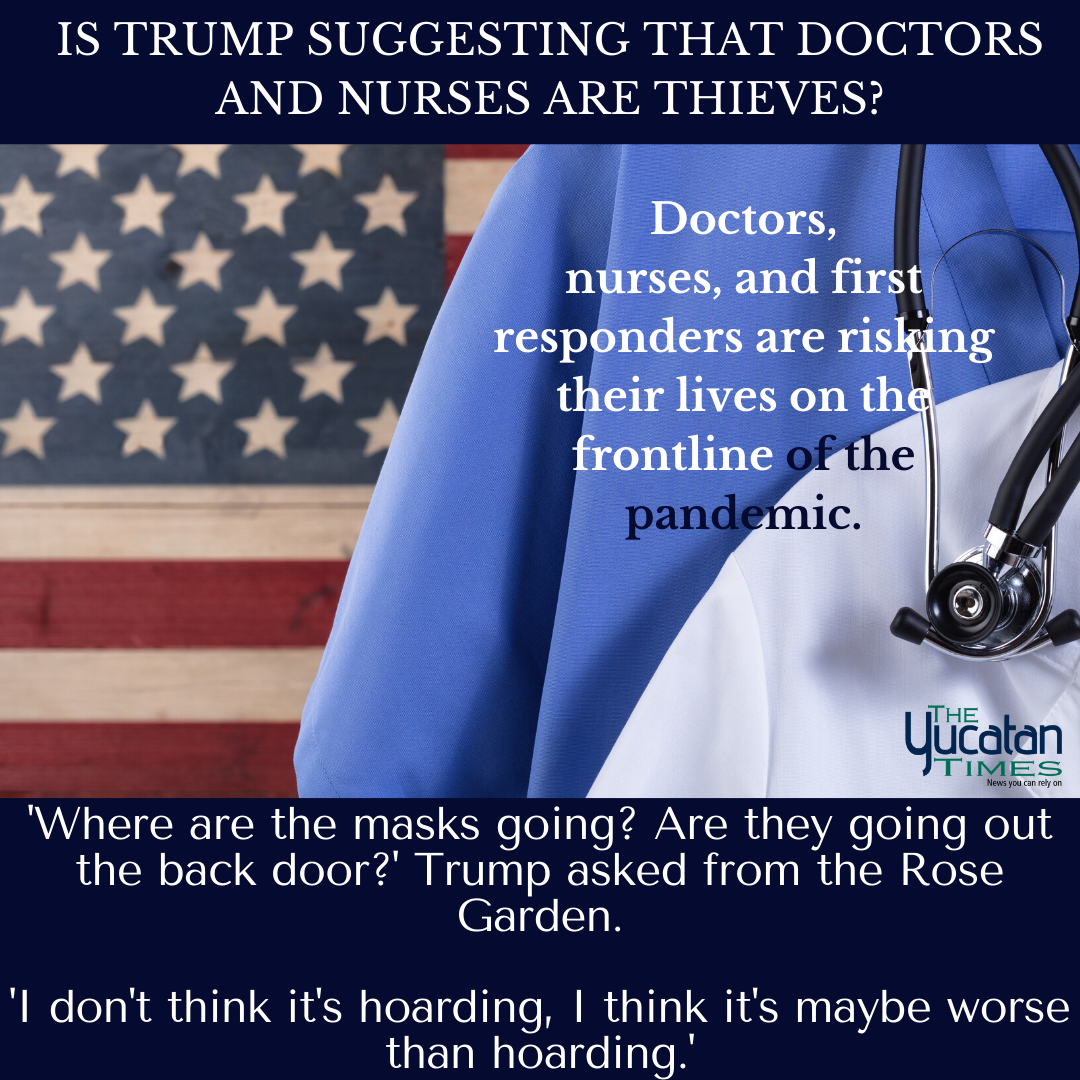 Kenneth Raske, president of Greater New York Hospital Association, said in a statement that medical workers “deserve better” than Trump’s comments as they deal with COVID-19, the disease caused by the new strain of coronavirus tearing through the world.

“New York’s health care workers are treating exploding numbers of COVID-19 patients around the clock —willingly and without complaint. My daughter, an ICU nurse at a New York City hospital, is one of them,” Raske said.

“The only thing they ask for in return is adequate amounts of personal protective equipment. PPE is the single thing that separates them from being COVID-19 patients themselves. They deserve better than their president suggesting that PPE is ‘going out the back door’ of New York hospitals. I urge you to focus on what you—and all of us—can do to help.”

This is absolutely ludicrous.

There is no hoarding or conspiracy going on here.

Just a simple fact: Our doctors and nurses need masks.

That’s the sad, unchanging truth unless the federal government steps up and protects our frontline workers. https://t.co/MCb73COmuf