As the race continues to legalize sports betting in states across the USA, we look at which ones have already legalized it, and which ones are almost on board.

In May 2018, US Congress lifted the federal ban on sports betting, which led to many states legalizing this betting practice. Over the last two years, more and more states have come on board, while some still have pending legislation that needs to be put into action before any bets take place.

What are the Benefits of Legalizing Sports Betting?
Before we take a look at which states have legalized this practice, it’s helpful to understand why anyone would want to legalize it in the first place.

One of the main reasons to legalize sports betting is to allow this practice to be taxed, since all transactions aren’t made on the black market, which means that it could bring in revenue for a state.

With this ability to drive revenue, jobs can also be created in this industry, and serve as a boon for tourism and other businesses that spring up around not only the practice of betting, but also running local and national sporting events.

In Which States is Sports Betting Legal? 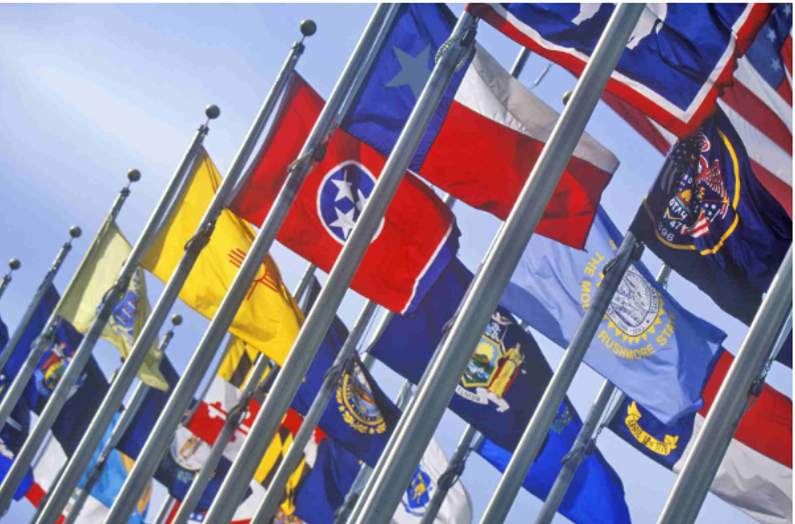 Currently, there are a number of states where sports betting is legal, although certain sports betting services, such as online gaming apps and websites, might have different service offerings for different states (depending on specific state legislation).

One of these states is Indiana, where sports betting was legalized in May 2019. In this state, the Indiana Gaming Commission oversees all regulations, which include a prohibition on betting on esports and on athletes under the age of 18. In this state, both mobile and in-person betting is allowed.

With an established gaming industry, New Jersey was one of the first states to legalize sports betting, and is considered one of the largest markets in the country. In New Jersey, both in-person and mobile wagering is allowed. While the legal betting age is 21, in this state anyone above 18 can bet on horse racing.

Other states that have a prominent sports betting industry include Nevada, which like New Jersey is well known for its variety of casinos and gambling culture in cities like Reno and Las Vegas. As opposed to other states, Nevada has actually allowed sports betting since 1949, which gave the state a monopoly on this practice until the federal ban was lifted in 2018.

In Which States is Sports Betting Legalization Pending?
After the federal ban was lifted in 2018, many states have begun the process of legalizing sports betting. However, the process is still not completely implemented as yet, therefore actual sports bets have not yet taken place.

These states include Montana and Washington D.C., which have approved legislation but with no launch date as yet. Other states like North Carolina have approved the practice in certain areas of the state, and Colorado and Tennessee are also set to launch sometime in 2020.

In addition to the above states, which are almost on board, in many other states the legislation still needs to be approved. These include states like Maine, Connecticut, Kentucky, Massachusetts, Maryland, Minnesota, Missouri, Kansas, Louisiana, Oklahoma, South Carolina, California, Ohio, Virginia, North Dakota, Arizona, Hawaii, south Dakota, Texas, Washington State, Georgia, Vermont, Alabama, Florida, Alaska, Wyoming and Nebraska.

As is clear from the list above, the majority of states in the USA are pending legalization of sports betting, subject to different legislation in each state.

In Which States is Sports Betting Illegal?
From the article above, it’s clear that while many states still have pending legislation and haven’t fully implemented the practice of sports betting, there is a general consensus that it will happen at some stage.

However, some states have outright banned the practice of sports betting, including Idaho, Wisconsin and Utah, but these form a small minority of the states on the list.

Final Thoughts on the 2020 Inter State Legalization Race
In this article, we have looked at the benefits of sports betting from a revenue generating and crime-reducing perspective, and have also given an overview of all the states where sports betting is allowed and where legislation is still pending.

For interest’s sake, we have included the three states where sports betting is illegal, but as we can see, these form a small minority of the states in the country. In fact, judging from the article above, most states are all set to implement sports betting at some point. Where this isn’t the case, sports betting is a fully fledged gaming industry in the state already, most prominently in states like New Jersey and Nevada.