Mobilization in the Periférico de Mérida after a high speed chase and a shootout.

MÉRIDA Yucatan (Times Media Mexico) – On Monday afternoon, March 10, 2020, police arrested a person who shot at a car after hitting it, and then against the police according to preliminary versions. 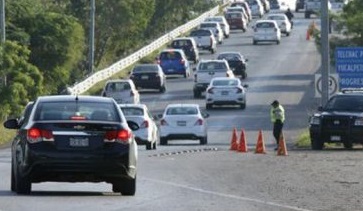 Shots were fired between the northern and western areas of Merida’s Periférico. A Jeep was seeing fleeing the scene after hitting another car near kilometer 17 of the Periférico.

The mobilization in the Periférico de Mérida
In that car were two men, who began to chase the SUV with the support of police assigned to the Periférico, but the occupant opened fire against the two men in the car and the police officers.
Witnesses indicate that the Jeep SUV was deteined at kilometer 38, near the Chenku subdivision. There, the SSP policemen managed to arrest a man a taken to the SSP where he was delivered to the Public Prosecutor’s Office.

Police Report
The Secretariat of Public Security (SSP) issued the following statement.
“This afternoon, state police officers captured the driver of a vehicle that after causing a traffic incident on the Periférico, he did not stop, and when chased, he activated a firearm.

The arrested man is 44-years-old from the state of Tabasco, who was driving a Jeep Liberty with Jalisco license plates and collided with a car with Yucatan plates driven by a 42-year-old man.

Police units received the report of the car accident began the search of the probable responsible party. The suspect was found one kilometer later. The suspect got out of the Jeep and during the struggle with the police officer, a shot was fired. There were no injuries. The citizen, was controled and placed under arrest.

The SSP elements moved the man him to a security area, and later taken into custody by the State Attorney General’s Office”.