Hacienda and Banxico come out in support of the Mexican peso

The Mexican Foreign Exchange Commission announces an increase of $10 billion in its program of exchange rate hedges settling in local currency. The Mexican peso was seriously affected by Monday’s financial uncertainty.

MEXICO CITY (Reuters) – Mexico’s Foreign Exchange Commission announced on Monday an increase of $10 billion in its program of exchange rate hedges settling in national currency, after the abrupt fall that the peso suffered due to a collapse in oil prices and fears about the advance of the coronavirus.

The commission, composed of officials from the Secretariat of Finance and the Governing Board of the Bank of Mexico, reported in a statement that decided to increase the size of the program to $30 billion dollars.

“The Commission reiterates that the anchoring of the value of the national currency will continue to be sought mainly through the preservation of solid economic foundations,” said the unit. 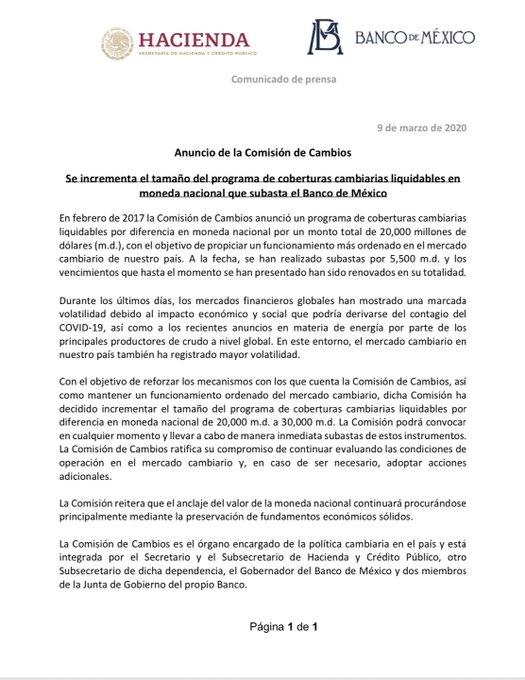 Mexican markets collapsed on Monday after a slump in oil prices added to fears about the impact on the global economy of the rapid spread of the coronavirus.

The peso recorded its sharpest fall since the election victory of U.S. President Donald Trump in November 2016, while the stock market closed at its lowest level since mid-October.

The currency ended at 20.7840 per dollar, with a decline of 3.39% against Reuters’ benchmark price on Friday, in its fifth consecutive day of losses.

According to Refinitiv Eikon’s measurement, which reflects the actual positions of the operators in the interbank market, the local currency fell in the session by 14% to its historical minimum level of 22.9290 units.