President Andrés Manuel López Obrador’s approval rating fell from 68 percent to 59 percent from December 2019 to date and accumulated a 19-point drop in one year and three months since he took office, according to a survey by Grupo Reforma.

MEXICO – (Times Media Mexico) – Last week was a bad week for Lopez Obrador, and this one, well, it doesn’t look much better. The numbers for PEMEX were disastrous. The feminist movement is extremely criticizing of his government due to his unfortunate comments. The media has showed documents that prove his government is doing the same dark practices of previous governments. In his native Tabasco, people lashed at him, to such an extent that he threatened to suspend the rally and to top it off, today Monday, March 02, 2020, 3 polls from different houses such as “Massive caller,” “Buendía & Laredo” and the one from Reforma newspaper that indicate an important drop in his approval.

In early March 2019, the head of the Federal Executive Branch had the approval of 78 percent among Mexicans. However, in this 2020 started with an approval of 59 percent and a disapproval of 35 percent.

On the other hand, 55 percent of Mexicans are confident that President López Obrador makes decisions that benefit the country. Furthermore, 67 percent see him as a “nice” president, while 60 percent consider him “fair,” 58 percent “honest,” 53 percent believe he speaks with “total truth,” and 48 percent have the perception that he “unites the country.”

However, a large percentage of citizens think that the government is inefficient in handling the economy and insecurity. Forty-five percent think that AMLO has not been able to generate well-being in the country. In comparison, 49 percent believe that poverty has not reduced, and 63 percent think that the security cabinet is not very well suited to fighting organized crime.

In this regard, 70 percent of the population thinks that the biggest problem facing the country today is insecurity and not corruption, as the Mexican president claims, which barely appears with 6 percent.

As for the insecurity issue, 74 percent of Mexicans believe that violence against women increased during the last 12 months of the Lopez Obrador administration. 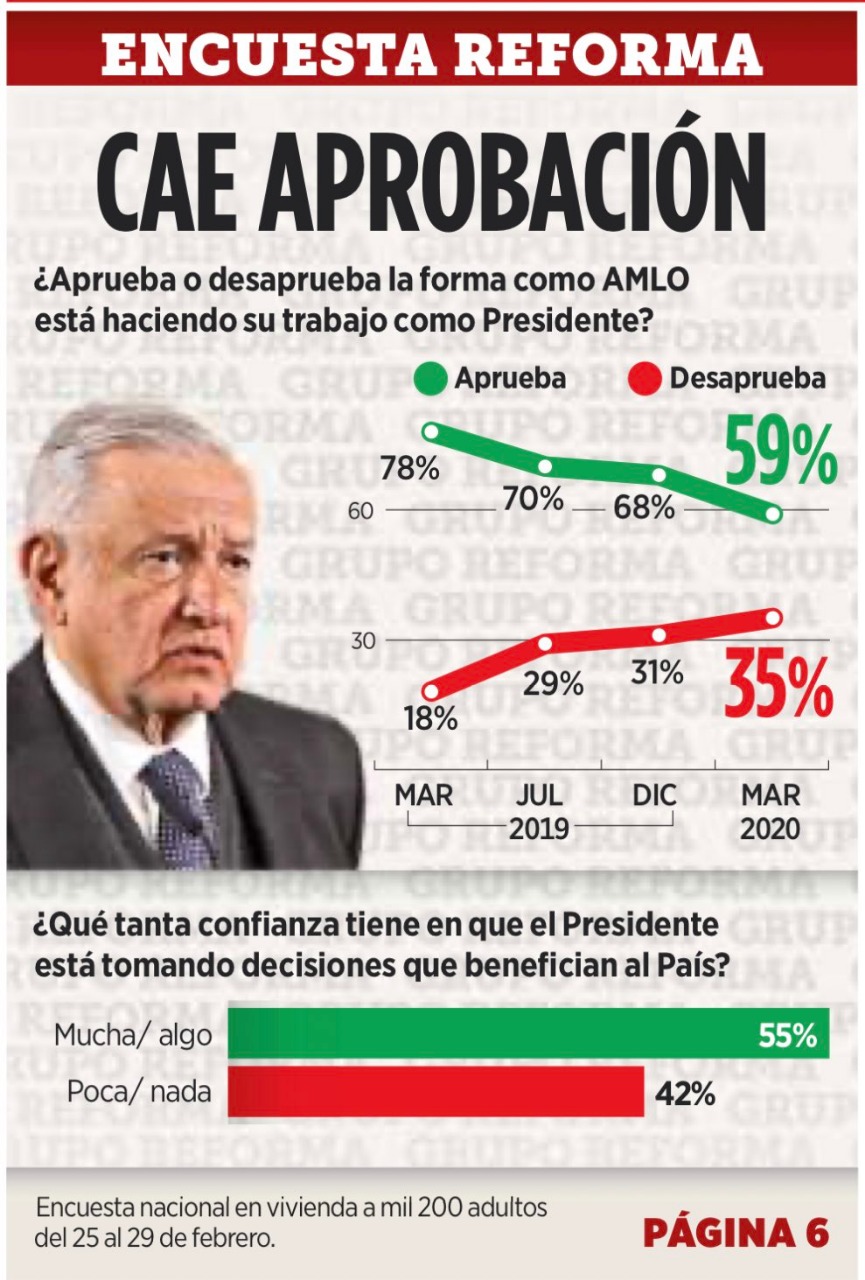 Forty-six percent of Mexicans believe that Lopez Obrador is mishandling the crisis in the health sector.

On other issues, 88 percent of Mexicans would favor initiating a process against former President Enrique Peña Nieto for corruption, while 6 percent were against it.

Likewise, the Morena party, founded in 2011 by López Obrador himself, has declined in approval among Mexicans. If there were elections for federal deputies today, 46 percent of the citizenry would give him their vote, as opposed to 57 percent who would have done so in March 2019.

However, support for parties such as Acción Nacional (PAN) or the Institutional Revolutionary Party (PRI), which register 16 percent support, has not risen, compared to 12 and 13 percent, respectively, that would have received in March 2019.

The survey carried out by the Grupo Reforma was a national housing survey conducted from 25 to February 29, 2019.