MEXICO: President Andrés Manuel López Obrador once again demonstrates his lack of sensitivity to the issue of women by announcing that next Monday, March 9, at 9:00 am, he will begin selling plane tickets for the raffle of the commercial value of the TP01 presidential plane. That same day, various organizations, companies, and governments have joined the initiative of the women’s strike, which emerged from feminist groups.

The president has repeatedly tried to diminish the feminist movement, arguing that it is a “plot by the conservatives to damage his government”.

In his morning press conference at the National Palace, AMLO was the first person to buy of a ticket for the “raffle of the presedential airplane” that won´t be raffled after all.

Ernesto Prieto Ortega, general director of the National Lottery for Public Assistance, explained that the distribution of tickets, which will cost 500 pesos each, began yesterday Monday and that the draw 235 of the institution will be on September 15 at 4:00 pm. 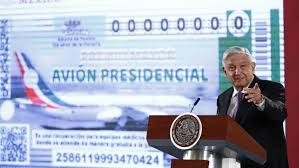 “The National Lottery is presenting the 235th draw that is allusive to the presidential plane. There are 100 prizes of 20 million pesos each, and the draw will the next Tuesday, September 15. 6 million tickets were drawn, with a cost of 500 pesos each and the reverse side stipulates that there are 6 million tickets in a draw to be held in Mexico City. We are reporting that as of yesterday began the distribution throughout the Republic of these tickets alluding to the presidential plane.

With a ticket, AMLO said, people can earn up to 20 million pesos. In total, 2 billion pesos will be distributed in prizes, and I reiterate, we started the distribution for the sale of these lottery tickets.
AMLO will donate the plane if he wins it.

After paying 500 pesos for the first ticket for the “raffle” of the TP01 Presidential Airplane, Andrés Manuel López Obrador assured that if he wins the 20 million pesos, he will donate it to student scholarships.