AMLO´s chief of staff involved in major scandal as journalists uncovered his involvement in concessions to exploit the largest amount of underground water for agricultural use in the Yucatán Peninsula. When questioned, Lopez remained quiet.

TIZIMÍN, Yucatán (APRO) – Alfonso Romo Garza, currently the head of Mexico’s presidential office, founded in 2007, “Enerall” a mega-project in Yucatan, with an extension of approximately 15 thousand hectares (37,065 acres) Alfonso Romo is AMLO’s closest man and his mega-project, has obtained concessions to exploit the largest amount of underground water for agricultural use in the Yucatán Peninsula.

This biotechnology company uses the aquifer with the most important reserve in the country, but whose average annual availability has dropped 43%. During its expansion, it has affected the vegetation and fauna without knowing how it complies with environmental mitigation measures. The company was also under investigation for destroying, without authorization a cenote, which is a sacred body of water for the Mayan culture: the investigation of the case resulted in a fine. The file was never sent for a criminal investigation.

Romo, who was one of Mexico’s best-known businessmen, left Enerall, before joining Andres Manuel Lopez Obrador’s team, at the end of 2018, but his family still owns the company

The inspectors found a 5,500-square-meter cenote that was covered with dirt, rocks, and debris and turned into just mud. Despite those findings, Profepa did not refer the case to the Public Prosecutor’s Office to investigate whether the events had constituted an environmental crime.

The company responsible for the events is Enerall, a company based on the country’s most important freshwater reserve, founded in 2007. A decade later, through a scheme of accumulation of territory with which it gathered nearly 15,000 hectares, it became the largest operator of underground water for agricultural use in the Yucatan Peninsula and the third-largest in the country.

For the expansion in its operation, the company intervened areas within the Mayan jungle and compromised the habitat and fauna settled in those areas. In the Environmental Impact Statements (EIS) that were approved, Enerall contemplates the execution of 11 measures to mitigate environmental damage.

It is currently unknown how they what was implemented and the results. Profepa has not carried out audits to verify compliance with these provisions, nor has Conagua conducted assessments to analyze the quality of the water on the company’s premises.

The cenote was capped, even though Enerall had agreed to preserve these bodies of water. After Profepa’s investigation the file was closed and a fine and temporary closure of the ranch where applied, yet nothing was done about the damage.

This is revealed by an investigation that was developed in alliance with the Latin American journalism platform CONNECTAS, Aristegui Noticias, Proceso, Ruido en la Red, Univision, Vice en Español and the support of the International Center for Journalists (ICFJ). The work involved formulating more than 1,500 requests for information through the Transparency Law, obtaining more than 1,000 documents from the company and its operations, as well as the analysis of more than 147,000 data from the Public Registry of Water Rights (REPDA) of the National Water Commission (Conagua).

The data obtained shows how rapid expansion turned Romo Garza, through Enerall, into a water cacique in Mayan territory. The company needs large amounts of the liquid to fulfill its founder’s vision of turning stony, unproductive soils into fertile land. The goal is to accelerate the cycle of nature by two centuries, as explained by Alfonso Romo himself, a 69-year-old agricultural engineer.

“If you go from Cancun by car to Merida, there is nothing. Well, but this whole area is sitting on the water. What did we do? You’ll see. Using state-of-the-art, Mexican, microorganism technology, we’re turning unproductive soils into productive ones. What nature does in 200 years, we are doing in one year,” he told a group of entrepreneurs in March 2017 during a Forbes magazine forum.

This has not been the only applied genetic technology project that AMLO’s chief of staff has been involved in. Alfonso Romo was the lead investor in Synthetic Genomics, a synthetic biology firm led by Craig Venter, the scientist who completed the mapping of the human genome. Besides, years ago, he founded Séminis, a company that was acquired by Monsanto, one of the world’s leading manufacturers of transgenic seeds.

The technology used to achieve the objectives in Yucatan is based on the use of a system that extracts water from the subsoil to irrigate the land 270 days a year through 60 wells and 30 pivots, each of which is kept active for 7 hours a day, according to a description sent by the company to Profepa and Conagua’s files.

Enerall’s internal information contained in Profepa’s file also indicates that it can produce 12,000 tons of bulk in an area of only 1,800 hectares in the autumn-winter cycle.

In a press release published in November 2017 by Cargill, a U.S. multinational which Enerall has a commercial alliance with was stated that the production of the company founded by Romo would be the main source to feed a grain storage plant with 50,000 tons of capacity and projected to reach 130,000 in the future. The detail of how much the productivity of Enerall amounted to, however, was not made clear in the statement.

The water from the Yucatan Peninsula aquifer, which Enerall has managed to tap like no other, is key to the area. Although the aquifer still has massive resources, in the last decade, it has seen its average annual availability plummet by nearly 50 percent. This fact has coincided, among other factors, with the leap in the granting of permits to exploit the aquifer in the last ten years, as evidenced by Conagua’s data.

The lack of water availability has caused discomfort among Mayan farmers, who, since 2016, according to Conagua, have suffered from historical records of extreme drought: they agree that their wells are dry or are falling in level because of those who irrigate without stopping.

In Tizimín, there are more than 500 communities, and 60% of the population lives in poverty. When the legal battle with Profepa to flood the cenote took place in April 2018, Romo Garza led the Plenus Group, of which Enerall is a subsidiary, and at the same time, he was the coordinator of López Obrador’s presidential campaign.

It should be noted that Romo was at the head of the team that drafted the economic bases of the current government’s Nation Project, which includes works in the Mexican southeast, such as the construction of the Mayan Train, which will have a station just a few kilometers from Enerall.

Alfonso Romo Garza has a long history as a businessman, but he also knew how to relate to power. He had a close relationship with former presidents Carlos Salinas de Gortari and Vicente Fox. However, with López Obrador, he launched himself as a public servant. His record in the Yucatan was no reason for the current Mexican president to take him away from his environment. In his government plan, López Obrador proposed raising awareness about the rational use of water, and in speeches, he insisted that he would be inflexible in punishing environmental crimes: “Those who damage the environment will be punished.” 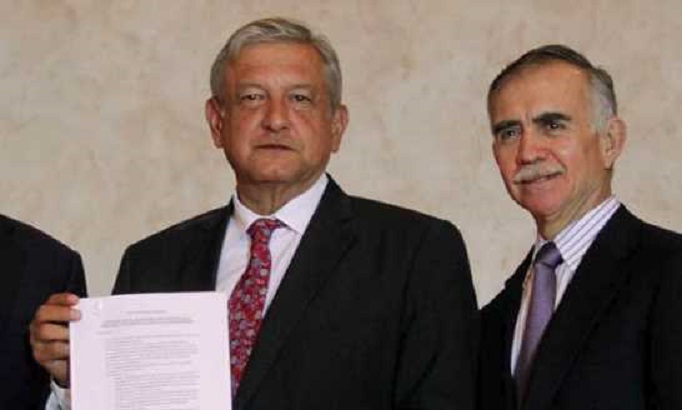 The power of Romo Garza as López Obrador’s right-hand man was affirmed last year, after he won his first political round against former Finance Minister Carlos Urzúa, who resigned from the cabinet on July 9, 2019.

Urzúa accused him of having a potential conflict of interest by trying to infiltrate economic secretariats with officials sympathetic to his business interests, which Romo denied. That morning, as Mexicans heard the news, Romo was meeting with Yucatan Governor Mauricio Vila Dosal, discussing new investments in the state.

At press time, neither the head of the Presidential Office, Alfonso Romo, nor Enerall’s legal representative, Katia Aguiar, responded to questionnaires and interview requests provided in advance.

Alfonso Romo did not choose the Mayan paradise by chance but because of the characteristics of the area that represented diamond on the rough for him. Walking in Tizimín is like walking on a giant gruyere cheese. The soil has thousands of ducts that allow the rain to quickly penetrate the subsoil and recharge the underground aquifers. That feature is common in the region, and it means that under the soils of the Yucatan Peninsula, two-thirds of the country’s renewable water is protected, according to the Water Atlas in Mexico published in 2018 by Conagua.

In January this year, Romo Garza was appointed coordinator of the Economic Growth Cabinet, a position that did not exist, but now will coordinate with ministries of state to generate jobs, bring peace and combat poverty of Mexicans.

As a businessman, he knew how to sculpt a figure of social entrepreneur, of technological visionary, but now an image of a water hoarder has emerged that has gotten away with the investigations for environmental damage.

It is said that Mexico’s future may lie in the water of the Yucatan Peninsula… today in the hands of one man.