The outrageous number of femicides in Mexico

Activist Frida Guerra announced the shocking number of femicides that have been committed in Mexico so far in 2020.

CIUDAD DE MEXICO (El Heraldo de Mexico) – The year 2019 was recorded as one of the bloodiest years for women in Mexico since, according to data from the Executive Secretariat of the National Public Security System, 976 alleged crimes of femicide were recorded.

The alarming figure threatens to be surpassed this year, since only in the 48 days since 2020, 265 terrible femicides have occurred.

In the morning, President Lopez Obrador was reproached by activist Frida Guerra for the femicides in Mexico. In 2019, 976 feminicides were registered nationwide.

In her Twitter account, the journalist also said that, of the 265 feminicides, 20 were committed against girls under 14 years old. Plumas Atómicas talked about it as well. 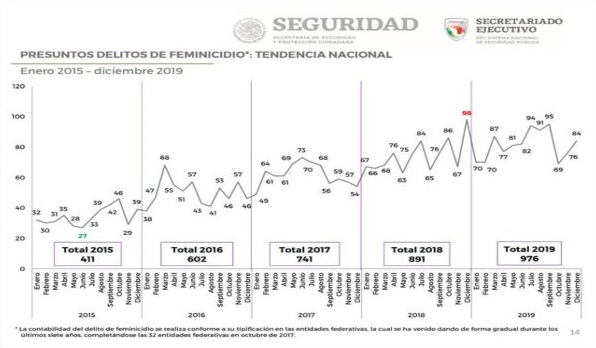 The five states with the most female-related crimes in 2019 were Veracruz with 157, Estado de México with 122, Mexico City with 68, Nuevo León with 67 and Puebla with 58.

It should be noted that Veracruz, the State of Mexico and Nuevo León have a Gender Violence against Women (GVW) alert, while the country’s capital and Puebla have been declared an emergency.

As if that weren’t enough, last year 197,693 emergency calls related to incidents of violence against women were registered from the State of Mexico, Jalisco and Mexico City.

Truth is… AMLO´s government isn’t doing anything about it… except blame the past.