The mummies of Santa Elena Yucatan

Perhaps you have heard about the “mummies of Guanajuato, Mexico”. In Yucatan, we have our own…

SANTA ELENA Yucatan (Times Media Mexico) – Perhaps you have heard about the “mummies of Guanajuato, Mexico”. In Yucatan, we have our own. Only 10 minutes from Ticul, in the municipality of Santa Elena, is the museum of the mummies, one of the attractions of Yucatan. This museum receives thousands of visitors throughout the year, but it is at its peak near the Day of the Dead celebration. The admission fee is $5 pesos per visitor.  Inside you can see various ancient objects and replicas of Mayan pieces.

The “museum of the mummies” is next to the parish of the municipality of Santa Elena and is one of the places that register more visits in that locality. During your visit you can tour three rooms in which there are several objects and murals with the history of the municipality, details of the attractions of the region such as archaeological sites and cenotes, among others.

One of the main attractions of the museum is a Mayan tomb located in one of the rooms of the museum, where you can see a skull and Mayan objects around it.

The biggest attraction in the building is in the last room: four infant mummies that were found years ago when remodeling work was being done in the community’s parish. According to the information from the museum, there were 12 mummies found at the site, some were sent to Merida for study, others were returned to the graves and only four are on display.

The mummies.
Mummy number one
Body of an infant preserved in good condition. Hair, nails and body covering tissue can be seen. Head slightly tilted forward, arms extended and hands supported at the height of the hips, legs extended slightly open.

Long dress carrier, reaching to the ankles, cotton socks and cap with flowers and endive similar to the dress. Placed on a bed of oak leaves.
Age: between 3 and 4 years old.
Sex: male.
Body: semi-momified.

Mummy number two.
Body of an infant in an extended position, with arms in the lap, head leaning forward with the chin touching the chest.

She wears a long white dress and a shawl over her shoulders. Around her neck she has a green and yellow fabric flower decoration, she has a tulle cap with an endive around the edge and a fabric flower on her forehead, her feet have cotton socks. It is placed on a bed of oak leaves.
Age: 7 years old.
Sex: female.
Body: semi-momified. 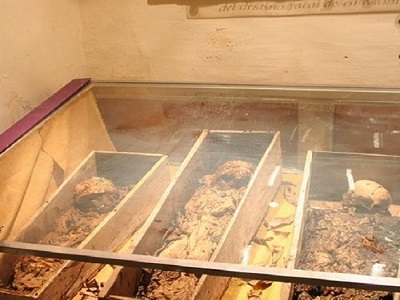 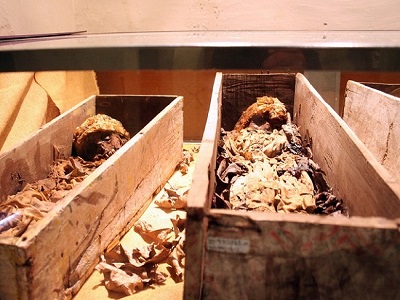 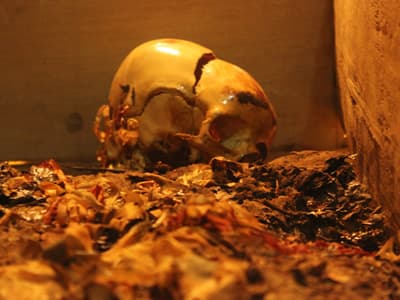 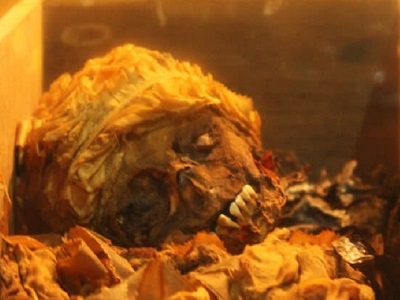 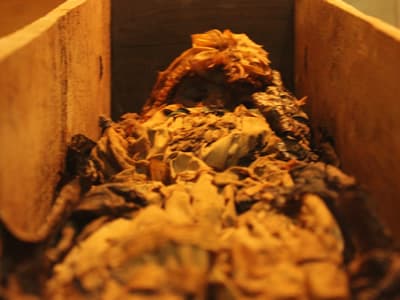 Brief history of the mummies of Santa Elena
The mummies were found in 1980 during the restoration of the church of San Mateo. While these works were being carried out, 12 small coffins were found, news that caused much expectation among the inhabitants, since even a local gazette gave the news with the title “The Dwarves of Santa Elena”.

The fact was reported to the Regional Center of the INAH, who carried out studies in the site of the finding; the investigators in charge of this were the archaeologists Peter J.Schmidt, Norberto González and the forensic anthropologist Lourdes Márquez Morfin.

After the remains were analyzed, a conclusion was reached. The bodies were not dwarfs, but child corpses that for some reason had not suffered the process of decomposition of some soft parts of the body and had been preserved in a state of mummification.

Of the 12 coffins, three were taken to the police forensic department in the city of Mérida; of the remaining nine it was only possible to obtain four, the other five were left in the baptistry and buried again under the floor of the church mosaic. Unfortunately, due to ignorance and superstition, the coffins were burned without any information about them being recorded.

The remaining four mummies with their respective coffins were subject to conservation and investigation by the Department of Restoration of the INAH Yucatan Center, packed in a high vacuum, as they are currently preserved in the museum.

If you visit Santa Elena, you may be interested in visiting Uxmal, located only 20 minutes away.