Jorge Victoria’s “Brushstrokes of History”.
A column for The Yucatan Times

Of the relations that the Yucatan Peninsula has had with other regions of the Caribbean, perhaps none has caused as much controversy as the so-called “sale of Mayan Indians” from Yucatan, taken to work in the Cuban sugar mills, in the period 1848 to 1861.

This was a historical event, not of a quantitative order, but rather because of the social, political and cultural significance in both societies. In that trade, the natives of Yucatan were hooked by means of contracts as free workers to lend their labor force for a number of years in the fields of Cuba.

However, little is known about the Mayan servants of the Yucatan families who moved to the Greater Antilles, fleeing the war (1847-1902) that had broken out in the Yucatan, before this trade of people occurred in 1848. It was an unofficial transfer of Mayans and mestizos when they entered the island as “free men”, but without pay.

The case of the domestic servants.  From mid-1847 and throughout the following year, numerous white or wealthy Yucatecan families migrated to Cuba carrying “a considerable number of Indian servants”, in an attempt to escape the war conflict.

The refugees received from the Havana authorities all kinds of facilities, hoping that they would be the colony of non-colored people that the island – according to the Cuban government – was looking for, as well as the possibility of introducing capital to invest.  On the other hand, the arrival of these people with their companions in the planters of the Island, could reawaken the idea of taking indigenous people from Mexico for labor in the Cuban fields. 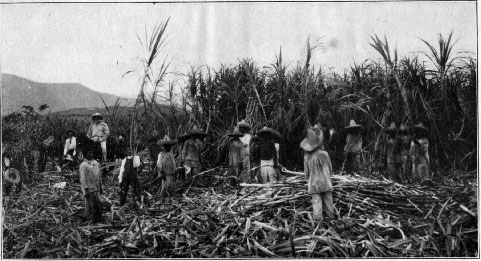 In the arrival of white Yucatecans, it was pointed out, the growing number of accompanying servants that they brought, which motivated the authorities the idea of regulating their presence and circumstance in Cuba. Nevertheless, in 1849 it was said that the Yucatecan families had returned to their place of origin, but leaving their servants in the island.

It is strange the return of the Yucatecan families to a region ignited by the war that continued if their presence in Cuba responded to an attempt to leave it; in case of the return trip who prevented them to leave their “protected” ones hired? The assignment of servants to another person must have sought economic retribution, both for the former head, in compensation for the time “dedicated” to their preparation, food and clothing, as well as for the new “masters”.

As a result, it is almost certain that the indigenous and mestizo people brought to Cuba as domestic servants in 1847 and 1848 were transferred to the countryside and without respecting the forms of Yucatan-style domestic guardianship, as was tacitly planned for them. Nor should we fail to consider their use in the form of renting out or hiring out domestic service, so in vogue in 19th century Havana society, even though it was said that there were very few of them in the city.

Without a doubt, this episode is a prelude to the trade that was later made official and that lasted for more than a decade.