These animals that weigh three tons can be aggressive and in Africa, they kill more people than any other animal. Scientists also warn that they threaten wildlife

DORADAL Colombia (AP) – Maria Jaramilla woke up in the middle of the night from the noise of her frightened mule. She looked out into the garden and was stunned: A hippopotamus was walking around her land and inspecting the surroundings of her house.

Since that night in 2018, the hippos have continued to visit the area, roaming the streets of Doradal, a small rural Colombian town four hours’ drive from Medellín. From time to time the hippos graze on the local soccer field.

An estimated 80, if not more, hippos live in this area of the Magdalena River, Colombia’s most important river, which cuts the country in half. They are the descendants of four hippopotamus that drug trafficker Pablo Escobar brought into the country to keep on his ranch.

They have reproduced rapidly and the authorities fear that one day they will attack people. These animals that weigh three tons can be aggressive and in Africa, they kill more people than any other animal. Scientists also warn that they threaten wildlife. 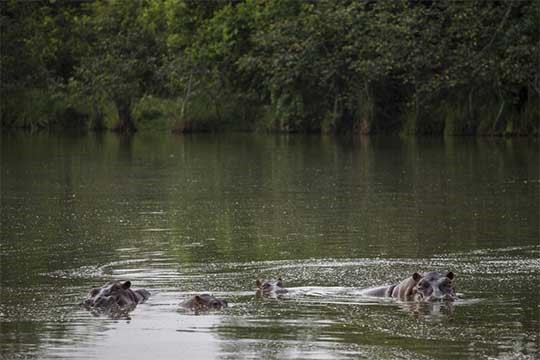 In the 1980s, during his heyday, Escobar had the hippopotamus locked up in a private zoo on his Hacienda Nápoles, where there were several exotic animals, such as giraffes and elephants.

After his death in 1993, most of the animals were relocated or died. But not the hippos. Because of their size and the cost of their transport, they were abandoned.

As Escobar’s farm collapsed, the animals reproduced. Conditions on the farm were ideal for them. It is a land with large lakes and streams, abundant pasture and where there are no natural predators.

Students from a small elementary school on the land that once belonged to Escobar see a sign every day on the road that says “danger, presence of hippopotamus”.

“It’s something that worries us,” said Wilber Quiñonez, who teaches at the school. “We have to lock ourselves in with the kids to avoid accidents. 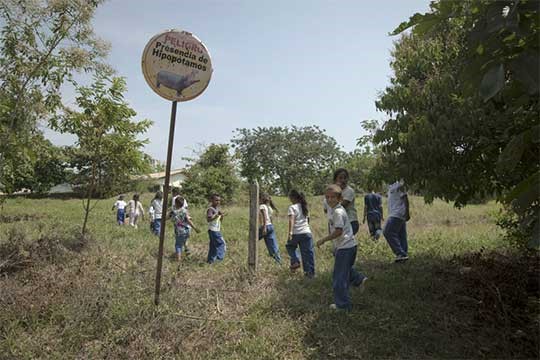 So far, hippopotami have not attacked humans, but as their numbers increase and their range expands, getting closer to populated areas, experts say it is inevitable that one day they will attack someone.

Many locals, however, are fond of the animals because of their surprising visits and their economic impact, since their presence attracts tourists. Every afternoon in the town’s main square, children hang and play with hippopotamus statues and businesses sell objects related to the animals.

There are indications that the hippos are displacing some typical species of the area and affecting the environment.

A study by the University of California, San Diego researchers indicated that hippos are altering the quality of the water in which they spend much of their time. They feed at night and spend the day cooling off in lakes and streams, altering the chemical composition of the water.

“This can have several negative consequences, including the appearance of harmful algae and bacteria,” said Jonathan Shurin, the UCSD biologist who led the study. “If their population continues to increase as it has, the potential impact could be much more severe”.

That’s why authorities are trying to find a solution. Cornare, a state agency, is charged with taking measures acceptable to the locals that will allow the animals to be disposed of humanely. “It’s urgent,” said Gina Serna, a Cornare specialist involved in the hippopotamus issue.

“We already have a report of a family of hippopotami in the Magdalena River. The Magdalena connects almost all of Colombia, which means they could reach any part of the country”.

The plan is to sterilize the animals. Serna and several Cornare employees performed the first surgical sterilization of a female hippo ever done in Colombia last year.

It is a complex procedure. The animal has to be attracted and locked up in a pen, where sedatives are used to put it to sleep. Cutting the layers of skin, fat and muscle can take three hours. Then the female is sterilized, sewn up and released. Specialists monitor her recovery.

But specialists admit that this will not be enough to contain the animals’ reproduction. It is estimated that the population will quadruple in the next ten years and that in the medium term there could be thousands in Colombia. For now, this is all that can be done with the means they have available. “With more money and more help, we could be more effective,” Serna said.

The villagers, meanwhile, are learning to live with their neighbors. For Giver Cardona, this means being very careful when he takes his wife to work on his motorcycle on dirt roads behind Hacienda Nápoles. 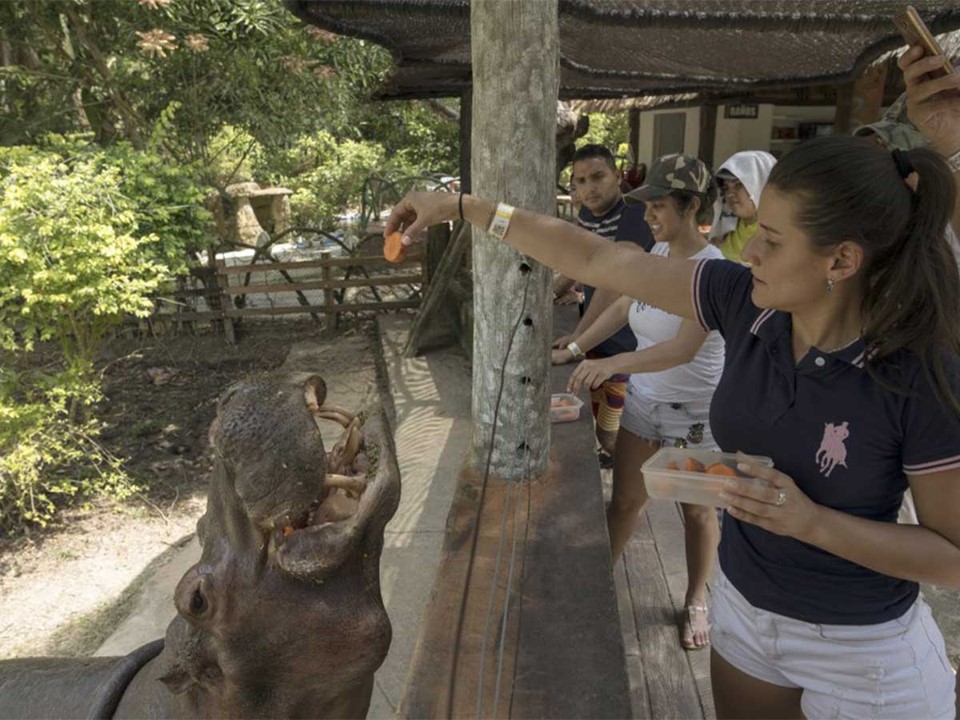 One recent morning, Cardona was returning home after taking his wife to work before dawn and taking a curve, crashing into a large, dark object. It was a hippopotamus.

Cardona, 31, stood up quickly and breathed a sigh of relief when he saw that the animal had the same reaction as him: It ran away.

“Now, when I pass by here in the morning, I go slowly, looking at what’s around every bend,” he said. “They’re something that worries us.”