Mexican presidential airplane will no longer be raffle prize – AMLO

MEXICO CITY (AMLO’s morning conference) – Andrés Manuel López Obrador, president of Mexico, confirmed this Friday in his morning press conference at the National Palace that there will be a raffle, but the prize will not be the presidential plane but cash. The president said that this is a decision that was made so that all Mexicans can participate.

AMLO also reiterated that the plane will remain in the Air Force for two years and if a buyer appears, perhaps it will be sold.

The raffle will begin on March 1 and 6 million tickets will be distributed, each costing $500 pesos (approximately $26 USD). There will be 3,010 street vendors in the metropolitan area and 2,658 throughout the country. The sale of all tickets will raise approximately $159,000,000 USD

What is the future of the presidential plane?
In the raffle, there will be one hundred winners and each will receive a prize of around US$ 1,000,000. The raffle will be held on September 15.

The president explained that any money left over after the full prize is awarded will be used to complete the payment of the airplane, buy “stuff for the poor” (SIC) and a smaller amount will go to the families of the lottery ticket sellers.

AMLO also reiterated that the plane will remain in the Air Force for two years and if a buyer appears it may be sold.

As expected, the memes came out almost immediately, making fun of the  presidential plane raffle. 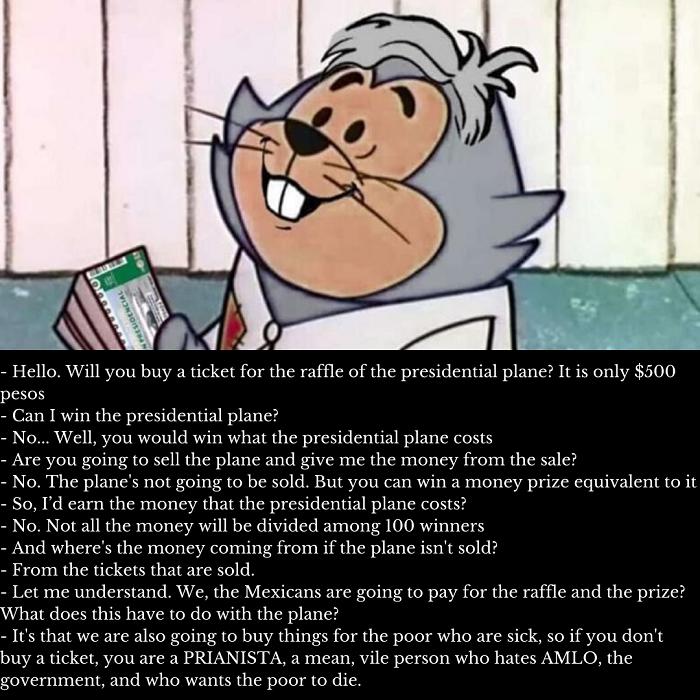 What is a fact is that Lopez Obrador found a way to get money out of the Mexicans by making them pay for something that is the governments responsability and a plane that, in the end, is not his and will not be theirs either.