Meet the 8th wonder of the world. – The Chapel of the Rosary, in the city of Puebla

During his first visit to Mexico, Pope John Paul II had the opportunity to admire this wonderful corner, housed in the Temple of Santo Domingo, which he called the “reliquary of America”.

PUEBLA Mexico (Mexico Desconocido) – The Chapel of the Rosary, housed in the Temple of Santo Domingo, in the city of Puebla, is undoubtedly one of the masterpieces of the New Spanish Baroque in Mexico. Built around 1690, this architectural jewel was considered in its time as the “eighth wonder of the world”.

Its interior, to the left transept of the complex, has a Latin cross, although with very short arms. The three theological virtues can be admired in the vault, framed by thick foliage; and in the dome, Grace can be seen, accompanied by the gifts of the Holy Spirit and a group of 16 Dominican saints.

In the upper part of the chapel walls there are six large canvases by the painter José Rodríguez Carnero, with themes alluding to the “Gozos de la Virgen”, while in the lower part of the walls there is a beautiful “lambrin” or panel of talavera type tiles. In the transept there are other paintings with themes also related to the life of the Virgin, as well as another one of great size that crowns the apse of the chapel and that is dedicated to the Glorification and Triumph of the Rosary.

The golden charm that surrounds the visitor in this place earned the space the title of “reliquary of America” by Pope John Paul II, who, during his first visit to national territory in 1979, had the opportunity to admire it and fall in love with its beauty. 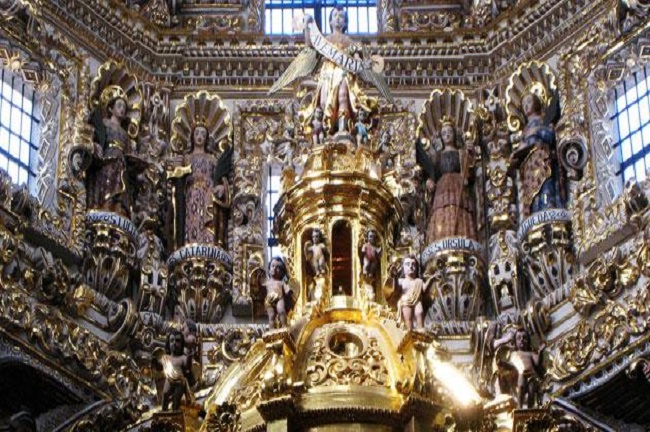 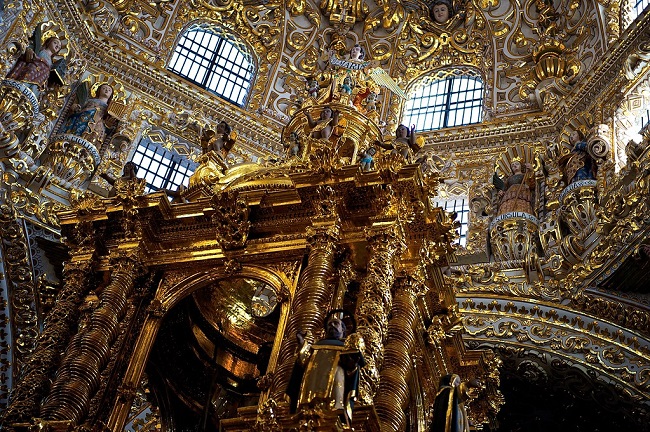 Late Mexican baroque style of the 16th century.
The poblano talavera that surrounds the chapel is 312 years old. The angels above those tiles were used to pray. When a person entered through a wing of the chapel and touched a little angel and prayed an “Our Father”; ten little angels in front prayed “10 Holy Mary’s´”. The person would go all the way around the chapel until he or she came out on the other side and then would finish praying the 15 mysteries of the Rosary.