Lack of medicines in Mexico grows 1000% and the government hides it.

Journalist Carlos Loret de Mola, a critic of AMLO’s government who had to leave Mexico due to government pressure, showed in his column a copy of the official presentation made to the director of the IMSS, Zoé Robledo

MEXICO CITY (El Universal) – An internal report from the Mexican Social Security Institute shows the size of the crisis experienced by the shortage of medicines and the complaints of the patients due to the bad service. President López Obrador has systematically tried to minimize the problem.

Journalist Carlos Loret de Mola, a critic of AMLO’s government who had to leave Mexico due to government pressure, showed in his column a copy of the official presentation made to the director of the IMSS, Zoé Robledo, thanks to top-level sources within the IMSS. Officials who are alarmed because the government is minimizing the crisis and that is costing lives, but who are afraid to give their names for fear of reprisals.

In this presentation, called “Report of Complaints and Negotiations for Refusal of Medication”, made by the Unit of Attention to the Beneficiary, two graphics reveal the official version that there is no such crisis in the health sector. The graphs that accompany this text show, month by month, from January 2018 to December 2019, two indicators: service complaints and management complaints about lack of medical care.

Both indicators rise dramatically in the second half of the year.
Throughout 2018, service complaints raised from those entitled to medicines, since for months, they did not receive their medications. This range continues in the first months of 2019, and from the second semester onwards the situation worsens: 159 complaints in July, 174 in August, 197 in September, reaching 220 in November, escalating to 294 in November and reaching the brutal figure of over 420 in December (the closure is up to the 22 of December). In summary, in half a year, complaints about the lack of medicines grew by more than 1000%, since at the beginning of 2019 they had a minimum, less than 40 per month.

The problem has intensified. It’s not only about the shortage of medicines. The lack of medical care also shot up. The graph is almost identical: a good month was July 2018 with only 62; a bad month was May with 271; but from August onwards the lack of attention flies: 343 in August, 547 in September, 837 in October, 1154 in November and 1309 in December until the 22nd. 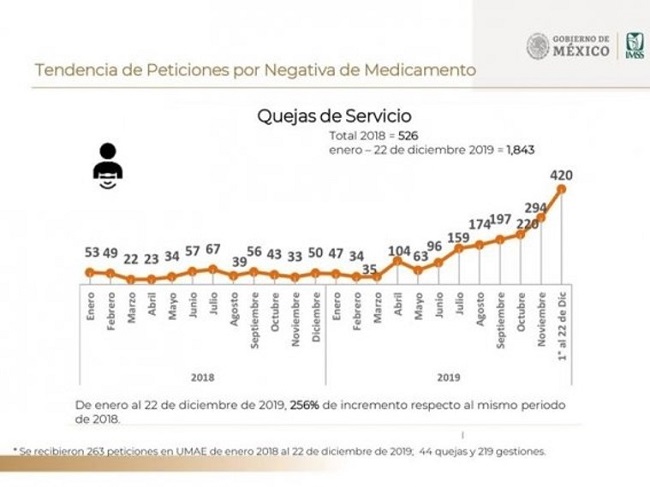 The presidential discourse says that this, only happens in high specialty hospitals, which is only a problem at the third level of public health (high-risk diseases), yet, the same internal IMSS document, which has not been made public, shows that the problems have skyrocketed at the first and second levels (outpatient care, and general and emergency hospitals, respectively). There are charts in the same sense that can also be consulted at www.carlosloret.com 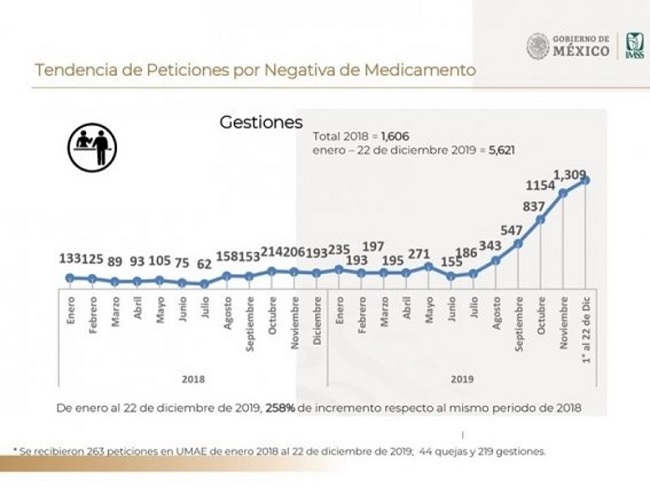 The journalist mentions that doctors have revealed to him that at the National Institute of Rehabilitation, orthopedic surgeries have fallen by approximately 70%. There is no money, the doctors have to tell their patients, who have two options left: 1. go to private health care and, –as an example—pay, for a hip operation, an average of 150 thousand pesos. 2. Put up with it and wait. Not to mention that bond paper and printer toner are bought by doctors with money from their pockets.