More than 460 years old, with a fantastic aspect to our 21st century eyes, the front of the Casa de Montejo, is made entirely of stone, with a Renaissance design and symbolism. It is divided into two bodies, lower and an upper, featuring allegories based on Greco-Roman and medieval mythology, two aspects of the story of Francisco de Montejo el Adelantado.

In the lower part, his efforts to conquer the Yucatan are represented. The upper part tells us about the lineage he founded, although his offspring did not reach the brilliance he surely desired for his descendants.

In the center of the façade, under the balcony, there is a sculpture of a character holding up the window. The researcher Guillermina Vázquez identifies a character from Greek mythology there: Hercules, taken up again during the Spanish Renaissance, to personify royalty, but in this case he symbolizes Montejo el Adelantado. 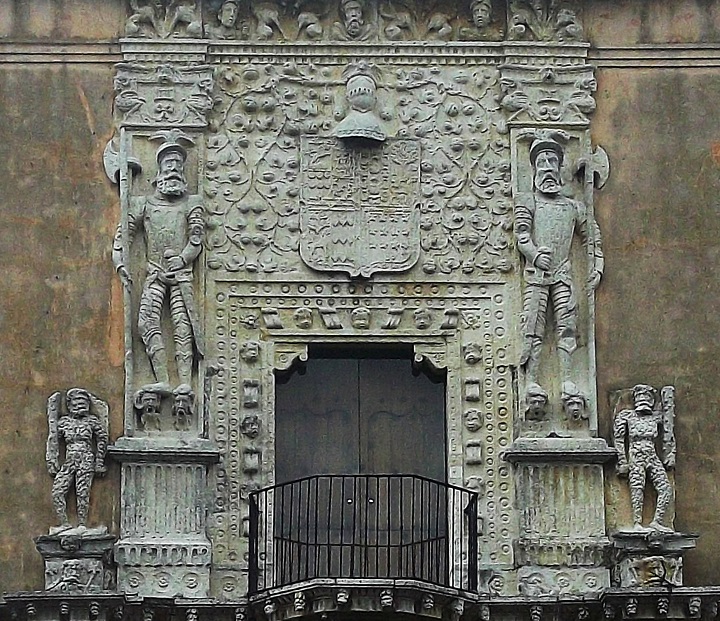 The lower body of the cover represents the triumph of the Adelantado over numerous difficulties and setbacks, which are depicted through mythological beings and characters from classical Greco-Roman antiquity, carved in the form of grottos, that is, whimsical adornments in the form of fantastic beings such as hypogriffs, griffins, mermaids, chimeras and fabulous entities, with human and animal forms, or with human and vegetable appearance.

Below these characters, there are two other busts, each one inside a medallion in the shape of a shell. Under the carving of the Adelantado, there is a female character, with her  face turned upwards, looking in the direction of Beatriz de Herrera, she is Montejo’s daughter, Catalina, held by her mother Beatriz de Herrera.

Below this, there is a male effigy, with his head uncovered and his face slightly inclined, looking forward, but towards the floor, is Francisco de Montejo el Mozo, the founder of the city of Merida, son of the Adelantado, but had out of wedlock with Ana de Leon, years before he married Beatriz de Herrera.

These carvings of the Adelantado and his family, are found in the midst of the many carves already mentioned, and refer to four of the twelve works of Hercules: 1) the garden of the Hesperides, 2) the lion of Nemea, (both pointed out by researcher Guillermina Vazquez, 3) a passage from the cattle of Geryon, and 4) the hydra.

In this lower part of the façade there is also an allusion to the journey of the Argonauts, with a very probable reference to the mermaids and the Amazons.

In the midst of equally wonderful characters, the upper body of the façade features scenes from the Middle Ages, such as the savages and the Spanish warriors, the honor granted by the Spanish crown to the Adelantado and, the praise of the ancestors, both of him and his wife Beatriz de Herrera, through the coats of arms carved on the façade, and gathered in a new coat of arms.

This original emblem is located above the balcony door, is flanked by two warriors and surrounded entirely by plant motifs, it is divided into four parts and has a helmet above it. The sides and the upper part of the door, depict diverse geometric motifs, that resemble of pre-Hispanic Mayan artistic elements. 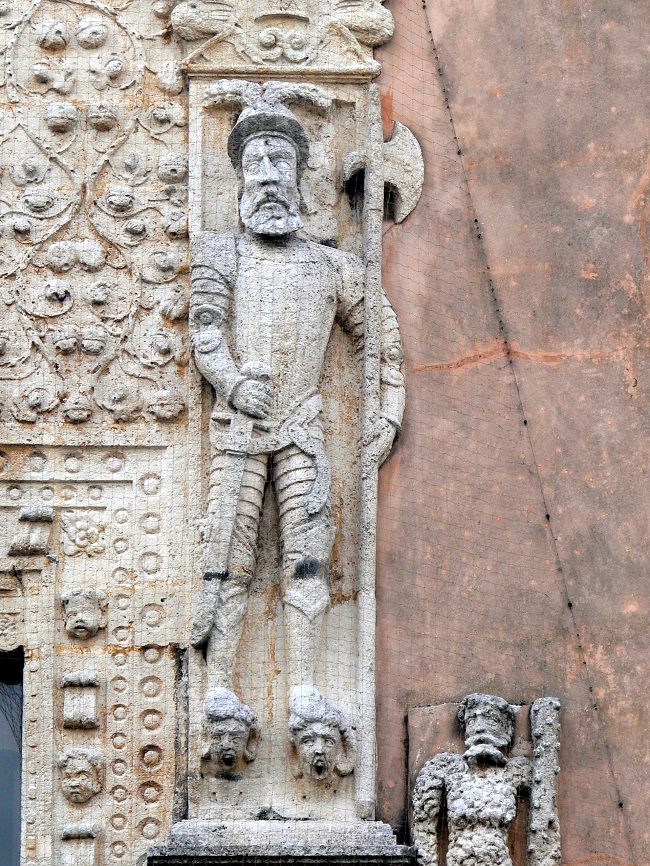 In the upper part of the façade, there is a pediment, a triangle, with two rampant lions, one on each side, each holding a decorative motif, which have been identified as the columns of Hercules. In the middle of these lions there is an inscription, where several authors claim that it can be read there: This work was commissioned by Don Francisco de Montejo, year of MDXLIX (1549).

However, recent analyses of this date written with Roman numerals, carried out by myself and other colleagues, indicate that this temporality was never carved, which is difficult to specify at this time, due to the erosion of the stone.

It is not known who made the design of this cover, however, it is observed that it was physically made by Maya indigenous sculptors, who left in the carvings traces of their culture, of course.

The House of Montejo, is one of the icons of our southern city, and of Yucatan as well. Its beauty and the magic of evocation that its carved stones have, make that the mystery that they project remains in time.