The Hyatt hotel group claims that it has the concession for 20 years to manage the beach privately; and it prevents people from entering.

CANCUN, Q. Roo. (Luces del Siglo) – The Federal Maritime Zone of the Mexican Caribbean has ceased to be public on large stretches of the Cancún coast where large hotel chains have installed security fences to prevent passage under the argument that it is “private property”.

Preventing traffic on the nation’s beach and sands violates the Mexican Caribbean Federal Maritime Zone’s provision, but that is not in the interest of Cancun’s Hyatt Ziva hotel, whose management has posted security guards to prevent non-guests from walking on the beach.

Many of the rejects are even foreign tourists who are not guests of the hotel chain, who seek to visit the emblematic Punta Cancún lighthouse or just peek at the concrete palapa that is a few meters away from the restriction, but are prevented from doing so.

Many of the rejects are even foreign tourists who are not guests of the hotel chain, who seek to visit the emblematic Punta Cancún lighthouse or just peek at the concrete palapa that is a few meters away from the restriction, but are prevented from doing so.

Without further explanation, the guards, pointing out that they have orders to prevent passage and claim that the company has the concession for the beach. 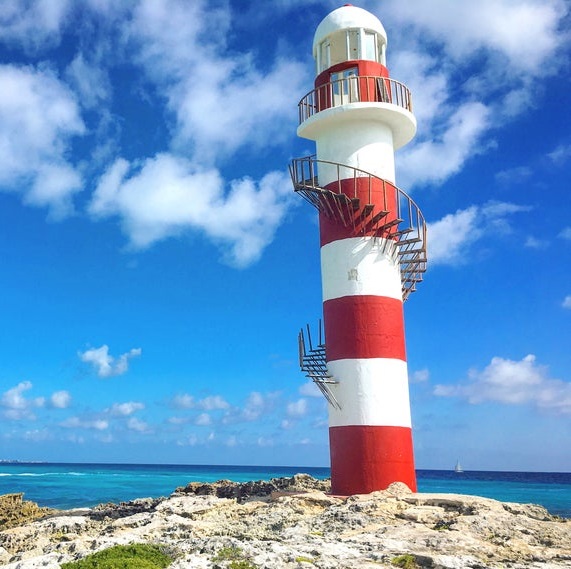 In fact, the Hyatt Ziva hotel in Cancun, whose rooms start at 8,500 pesos, has the concessions for the use and exploitation of the Federal Maritime Zone of the Mexican Caribbean through official letter number 154/13, dated March 22, 2013 and valid for 20 years, but obliged to respect 20 meters of public passage from the seashore.

In addition, Conagua issued two permits to exploit two wells to extract one million 103 thousand cubic meters of water, according to the general data of the environmental impact project carried out in 2016.

In the same study it is clarified in the number of criterion URB-47 that easements and accesses to the federal maritime land zone and free passage through the federal zone will be established at a maximum distance of one thousand meters between these accesses.

Article 8 states that “access to maritime beaches and the Federal Maritime-Terrestrial Zone (Zofemat) adjoining them may not be inhibited, restricted or conditioned except as provided for in the regulations

In accordance with the National Property Act and the Regulations for the Use and Development of the Territorial Sea, waterways, beaches, federal maritime land zone and land reclaimed from the sea, are public.

However, like all the neighboring hotels in the Cancún area, the entire shore is defined as a federal zone, but it seems that they want to make it private property, something that is not permitted.

The Federal Attorney’s Office for Environmental Protection (Profepa) has already made the relevant clarifications to the management of the lodging center, but to date they have not respected the provisions.

The Hyatt Ziva Hotel claims, in the environmental impact study, that according to the Local Ecological Reorganization Program of the Benito Juarez municipality – Cancun – which was published on July 20, 2005 and modified on February 27, 2014, and which is aimed at planning, programming and evaluating the use of land outside the zone regulated by an urban development program and the management of natural resources in the municipal territory, in order to preserve and restore the ecological balance and protect the environment, does not contemplate these provisions.

The Hyatt Ziva is covered by a municipal regulation and ignores the federal provisions of the Zofemat that all hotels in the area respect.

The Yucatan Times
Newsroom
–With information from Luces del Siglo—