Chacmultun is an archaeological site of the Mayan culture located in the south of the state of Yucatan, approximately 120 km southeast of Merida, in the municipality of Tekax. The archaeological site is located at an altitude of 60 meters above sea level. 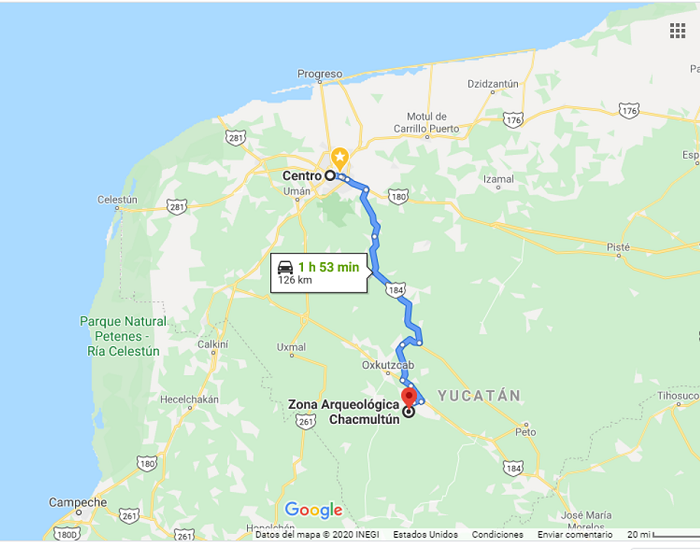 Chacmultún means “piles of red stone”, in the Mayan language, and it is applied specifically to the group of buildings in the northwestern part of the site. The ruins were discovered in 1970 by Austrian explorer Toebert Maler.

The real name of the site is unknown but the name Chacmultún was coined due to the stones that cover the walls. This coloration is a consequence of the microorganisms that inhabit the area, whose particles when in contact with water and air, redden the stones.

Most of its buildings were erected on foundations up to 8 meters high, which gives it an image of supremacy and power. The larger area, covers approximately one square kilometer. There are three main groups of buildings: Chacmultun, Cabalpak (also known as “Kabalpak” and means “low terrace”), X’ethpool (means “cut head”) and the center. The buildings sit on top of small hills in the region.

Chacmultún is a very interesting area, which offer a different perception to anything seen before in pre-Hispanic Mayan cities, particularly because of the reddish tones of the stone. This is why columns, friezes, lintels and other ornamental elements of facades and walls acquire an additional attraction.

Inside some buildings you will be able to appreciate pre-Hispanic murals with diverse motifs and characters that today are the object of study by experts.

The first group of ruins, is built on a polygonal platform of almost 1,200 square meters, you can appreciate at least 5 temples still standing, a “chultun” or well where the Mayans stored rainwater and some monuments almost in the center of the platform. The impressive thing about the area is that almost the entire platform is covered with stones as a floor, you can appreciate that it was built with luxury on details and in its time may have seemed a city completely appreciated.

The facades of the Mayan constructions have certain resemblance with those found in the quadrangle of the nuns in Uxmal, however, in Chacmutún the decoration type columns predominate. The facade of one of the main temples, like Uxmal, is found in niches in the shape of houses which are currently empty.

In the archaeological zone there is a small ball game area, the size of the  field is only about 25 meters and the temples that the Mayan priests occupied are completely destroyed.

Its entrance hours are from 08:00 am to 05:00 pm. Please remember that after-hours visits are a violation of the law.