MEXICO (Vanguardia) – The public’s approval of Andrés Manuel López Obrador reached its lowest point in January 2020, with only 56.5 percent of citizens supporting him, according to a survey by Consulta Mitofsky.

According to the firm specializing in opinion polls, which has been conducting a tracking poll since April of last year involving 15,000 people over the age of 18, during the 31 days of January, the president’s popularity fell 19 times, compared to only 9 times when it showed an increase.

The final approval figure for January 2020 would mean that Lopez Obrador linked four consecutive months with falling popularity, after in September reached the maximum monthly average of 63.2 percent, with a peak of 64.4 percent on the 24th of that month. 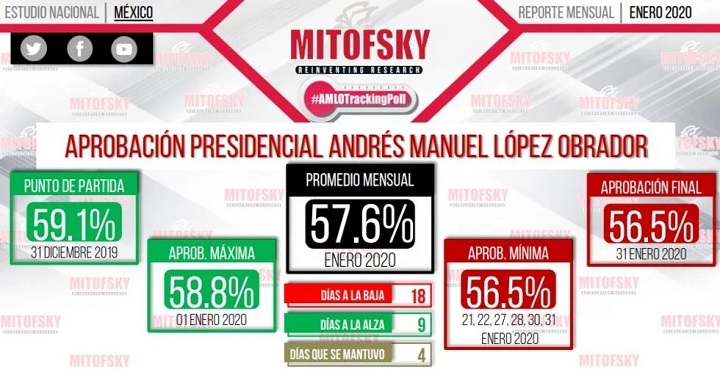 The drop in the number of people who approve of the current federal government’s performance implies a loss of 7.8 percentage points between September 24 and January 31, the steepest drop since the pollster made this measurement.

The loss of support would be more pronounced in the female segment of the population whose approval fell, at the end of January, to 55.6 percent, against 59.8 percent of men.

By age group, despite being one of the segments most favored by the current government’s social policies, in the first month of this year the president only obtained the support of half of the people over 50, while 65.6 percent of young people between 18 and 29 years old maintained their support for the Tabasco politician. 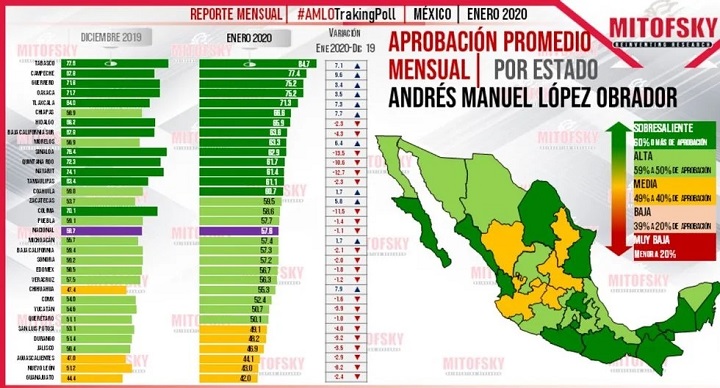 In the state-by-state measurement, Coahuila registered a slight increase in January (1.7 percentage points), compared to December 2019, receiving an approval of 60.7 percent from local respondents.

With this figure, Coahuila ranks as the second border state where Lopez Obrador continues to have high popularity figures, only below Tamaulipas where the presidential approval is 61.1 percent.

The data also returned Coahuila to the group of entities where, according to Mitosfky’s classification, the President obtains an “outstanding” rating (above 60 percent), although it is the last of the 14 that are in this range, Tabasco being the first with 84.7 percent of popular support for López Obrador.