According to CNN, authorities in the People’s Republic of China have enforced a partial lockdown in the central city of Wuhan, as well as nearby Huanggang and Ezhou, as authorities battle to contain a deadly coronavirus outbreak.

These efforts will disrupt the Lunar New Year travel plans of millions, and authorities in the Chinese capital Beijing have canceled all large-scale celebrations.
The lockdowns come as the Chinese government revealed that seven of the 17 people who have died from the Wuhan coronavirus did not have pre-existing conditions before they contracted the illness.
And the virus spreads more easily from person to person than previously thought, according to David Heymann of the World Health Organization (WHO). 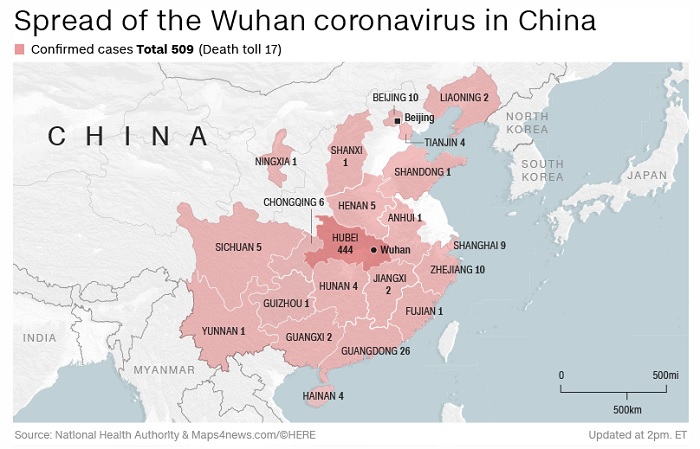 The virus initially appeared to spread only by very close contact that would typically occur within a family, such as hugging, kissing, or sharing eating utensils, Heymann said.
Now, he says evidence is accruing that shows more distant contact could spread the virus, such as if a sick person were to sneeze or cough near someone else’s face.
He said there is no evidence at this point that the virus is airborne and could be spread across a room, as happens with the flu or measles.
Wuhan — ground zero for the pneumonia-like respiratory virus — “temporarily” closed its airport and railway stations on Thursday for departing passengers. All public transport services in the city of 11 million people have also been suspended until further notice.
On Thursday afternoon, transport authorities began shutting down some of the main highways leaving Wuhan, according to state news agency Xinhua. 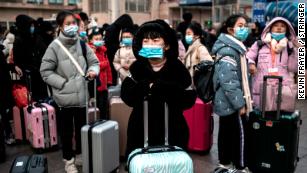 The wearing of face masks is now mandatory in all public places in the city, including hotels, restaurants, parks, cafes, and shopping malls.
“People who don’t obey the requirements shall be dealt with by authorities in accordance with their respective duties and laws,” a statement from Wuhan’s municipal government said on Wednesday.
Authorities in Huanggang, about 80 kilometers (50 miles) east of Wuhan, announced a series of similar measures cutting off the city as of midnight local time (11 a.m. ET on Thursday).
Government officials said in a statement that the city’s subway and train stations will close, per a report in the People’s Daily, a state-run newspaper. All theaters, internet cafes and indoor public culture, tourism and entertainment facilities in the city will also stop business, People’s Daily reported.
Hundreds of thousands of people will likely be affected. The entire administrative area of Huanggang has a population of 7.5 million, but People’s Daily reported that the lockdown only applies to the urban area, which is only a part of the total population.
In Ezhou, the city’s railway station has been closed “in order to fully conduct prevention and control of the new type of pneumonia … effectively cut off the transmission of the virus, resolutely curb the spread of the epidemic, and ensure the safety and health of the people,” according to a statement from city’s Coronavirus Disease Prevention Control Headquarters on Thursday.
There was an unusual flurry of activity around the train stations in Wuhan early Thursday morning, as passengers — most of them wearing face masks — scrambled to leave the city before the lockdown began. Families were seen unloading their cars and hurrying to get into lines that already stretched outside the doors. 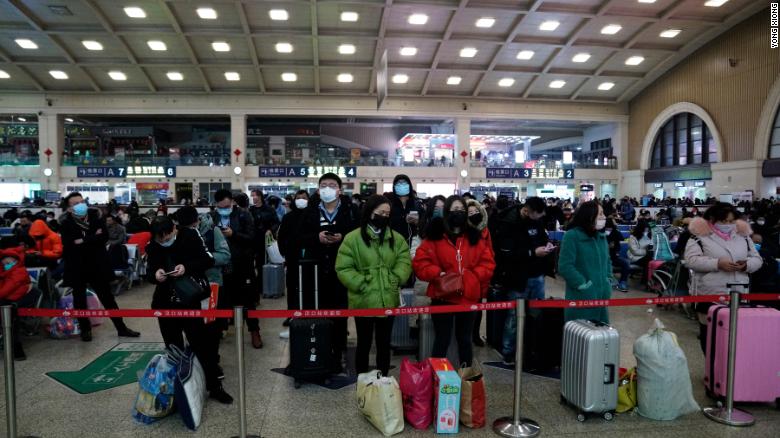 Travelers at Wuhan’s Hankou railway station queue to leave the city early on Thursday morning before the citywide lockdown came into effect.

At Wuhan’s Hankou railway station, one of the country’s busiest high-speed rail hubs, officials used thermal detectors to scan for potential fevers as dozens of passengers filed through the security screening. Inside, crowds were shoulder to shoulder as they waited for trains out of the city.

The mass exodus was met with anger from many users of the Weibo microblogging platform.
CLICK HERE FOR FULL ARTICLE ON CNN