The rise and fall of “MeToo Mérida”

YUCATÁN.— On Tuesday January 14th, the Metoo Mérida account was created on Twitter; seeking to expose rapists, abusers and stalkers in the ‘White City’.

A few hours after its opening, twitter users started filling complaints against several Yucatecan men, anonymously accusing them of harassment, rape and other types of vexation.

Then, on Wednesday Jan. 15th, the allegations increased and many more men were accused of allegedly committed outrageous acts against women in Merida.

Due to the large number of complaints received by the Twitter account, a young man named @chelorejón offered a substantial reward to find the person responsible for creating the account, and claimed that “this situation has only served to defame and destroy families and relationships”. 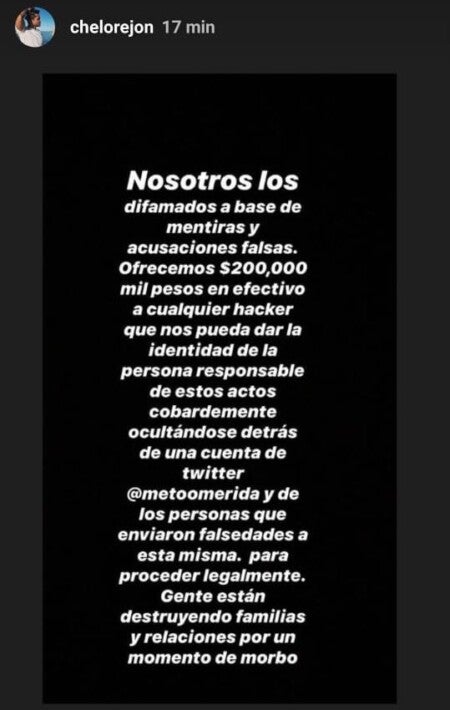 To this notice, many users reacted by commenting and sharing the post.

Many women shared their stories, the complaint was anonymous, but the accused were exposed in several cases with photography, and screenshots of the attackers’ social networks.

And as complaints kept coming, suddenly someone decided to offer a large reward to find the creator of the page.

You offer $ 200,000 pesos to anyone who could give the name of the person in charge of the page that only served to “destroy families and relationships for a moment of morbidity”?

I am ashamed that “you perverts” have the “balls” to offer money to find the people behind this page!