The Yucatan Times presents part IV in its new “The Chichén Itzá series” bringing you a closer look on the history of the  main sites and buidings of this amazing new wonder of the world.

—Read part I— The Temple of the warriors

As a silent witness of time, in the world-famous Mayan city of Chichen Itza, “El Caracol” or the “observatory” stands as a monument to the architectural skill of the ancient Maya civilization, as well as their vast and advanced understanding of the skies.

People cannot longer go inside this magnificent building which takes its name “El Caracol”, (translates to “the snail”), from the winding staircase that rounds the interior of the central tower. The stacked levels of the building resemble a stone wedding cake with staggered staircases leading to the central tower and its collapsed dome in a way similar to the design of modern observatories.

Due to dense trees and scrub brush, sky-watching of any kind is impossible. That is why El Caracol’s crumbling viewing tower rises above the thick Maya jungle, so ancient astronomers could have viewed the stars in 360 degrees, tracking solstices, equinoxes, and eclipses. The observatory sits high on a four-cornered but not quite square platform providing the ancient astronomers, unobstructed views of the skies and surrounding landscape.

The alignment of the remaining viewing windows, show us how they were designed specifically to track the appearance and disappearance of Venus in the night sky. In addition to assigning the second planet some religious significance, the Mayans were able to track the movements of Venus and thus measure longer intervals of the Earth’s orbit. 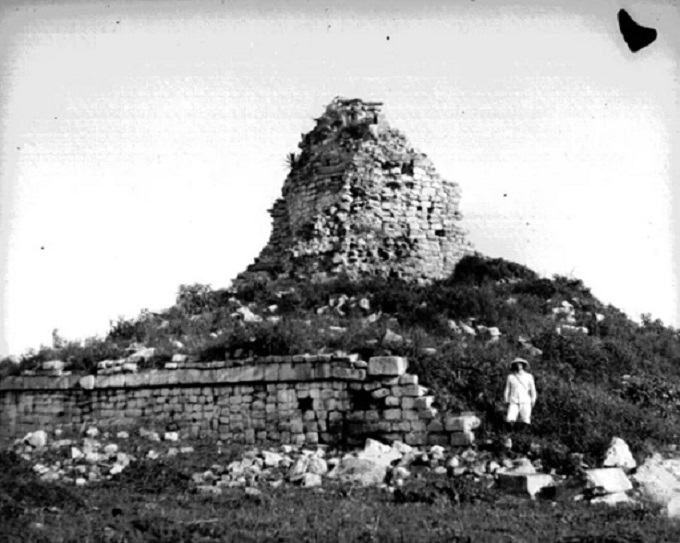 El Caracol seems to be carefully aligned with the motions of Venus. Venus had tremendous significance for the Maya; this bright planet was considered the sun’s twin and a war god. Mayan leaders used the changing position of Venus to plan appropriate times for raids and battles.

The grand staircase that marks the front of El Caracol faces 27.5 degrees north of west—out of line with the other buildings at the site, but an almost perfect match for the northern extreme of Venus, theplanet’s most northerly position in the sky. Also, a diagonal formed by the northeast and southwest corners of the building aligns with both the summer solstice sunrise and the winter solstice sunset.

In 1913, Sylvanas Morley, an American archaeologist working with the Carnegie Institute, received permission by the Mexican government to excavate the main Acropolis at Chichen Itza. One of these buildings was the El Caracol, and discovered it was an astronomical observatory for charting the skies.

We now know that the Maya developed a number of highly advanced sciences, highlighted by their spectacular knowledge of astronomy; they were skilled engineers, and had a mathematics which could calculate dates billions of years in the past and far into the future.

Very unfortunately, Friar Diego de Landa burned the texts, codex, libraries, technical manuals and the history of one of the most advanced cultures on our planet, leaving us with multiple theories and hypothesis regarding the history of the Maya and their highly advanced sciences.

Observing Space and Time
El Caracol stands on a massive 75 by 57-meter (246 by 226-foot) platform, engineered to support the tower and counter balance any movements in the Earth. To date, no surface penetrating radar has been used to detect what lies inside the platform, but it appears that a drainage system was incorporated to keep water from accumulating on the surface. The terrace, which connects the observatory to the platform, measures 26 by 30 meters (85 by 98 feet), and contains engineering features that function in a surprisingly efficient manner as a viewing mechanism. Two flights of stairs lead to the highly complex cylindrical structure that sits on a round base 18 meters (59) in diameter and which is covered in Puuc-style friezes with projecting cornices.

The construction of the El Caracol tower contains a series of technological and architectural innovations culminating in three concentric cylinders separated by ring vaulting. The outer cylinder has four doorways placed at the cardinal point of the compass.

A circular “corridor” separates it from the middle cylinder which measures eight meters (26 feet) in diameter. The second circle has four doors in a quincunx (five points arranged in a cross) arrangement in relations to those on the exterior. Like the first, it has a vaulted ceiling and contains a solid central core of masonry in which a narrow spiral passage leads to the high chamber, with spyholes in the walls.

The building was heavily damaged when it was discovered and only three surviving spyholes, providing barely enough information to understand its functions.

Astronomists believe that the first observation orifice in the observatory, faces directly south; the second aligns with the setting of the moon on March 21; the third faces directly towards the west and towards the point where the sun sets at the equinoxes on March 21 and September 21. The second viewpoint through the same spyhole corresponds to the setting of the sun at the summer solstice on June 21.

These details are the foundations of the Maya astronomical system. How, were the Maya able to calculate the movements of Venus, and other planets including the sun and the moon? We will never know. Archaeologists believe that the naked eye was sufficient for these observations and calculations… yet, no one is sure of that.

One way or another, “El Caracol” is absolutely one of a kind amongst the Maya observatories.  Its design has never been found nor duplicated anywhere else in the Mayan world.

Some believe the very building itself was a teaching tool for higher learning but one thing is a fact: this construction has left the experts around the world with more questions than answers regarding its operation, its function and what the ancient Maya may have discovered as they scanned the cosmos.

We can only hope that someday, perhaps, a codex or astronomy book will be found to finally reveal to the world what, to this day, experts continue to wonder about the ancient history of the Maya.