The Yucatan Times presents part III in its new “The Chichén Itzá series” bringing you a closer look on the history of the  main sites and buidings of this amazing new wonder of the world.

—Read part I— The Temple of the warriors

The Ball Game
Ball games were played throughout Mesoamerica in pre-Columbian times. Different versions of a ball game were played from very early times. In prominent centers such as El Tajin or Chichen Itza, remains of these “sacred playgrouns” have been discovered.

The oldest ball court yet discovered was built around 1400 BC at Paso de la Amada in Chiapas, Mexico and the earliest known rubber balls are even older and were found at an Olmec sacrificial site.

Some experts even say that it was the Olmeca who invented the Mesoamerican ball game, due to the hypothesis that the rubber tree was not found in the highlands of the Aztec Empire, however, historic records show that every so often, thousands of lumps of raw rubber were imported from the Gulf lowland, most of it for making rubber balls.

The Aztecs referred to the people in this lowland region as Olmeca, from the Nahuatl word “Olmēcatl”, composed of the two words “olli” meaning “rubber”, and mēcatl meaning “people”, so the word means “rubber people

The ball game was very popular among Pre-Colombian civilizations for more than 2,000 years, and was still played by the Aztecs when the Spaniards arrived.

Mayan Ball Game
Unlike the violent Aztec version, the Maya played a more gentle and elegant game of skill, however, from the multiple depictions that have survived and some of the remaining Maya writings it is evident that the Mayan ball game was as deadly as the Aztec.

Some historians have mention that in ritual games, the leader of the losing team would be sacrificed, and his skull would then be used as the core around which a new rubber ball would be made. Although the sacrifice part was likely happened from time to time, that theory has been denied by Christophe Helmke, an associate professor at the Institute of Cross-Cultural and Regional Studies at the University of Copenhagen. 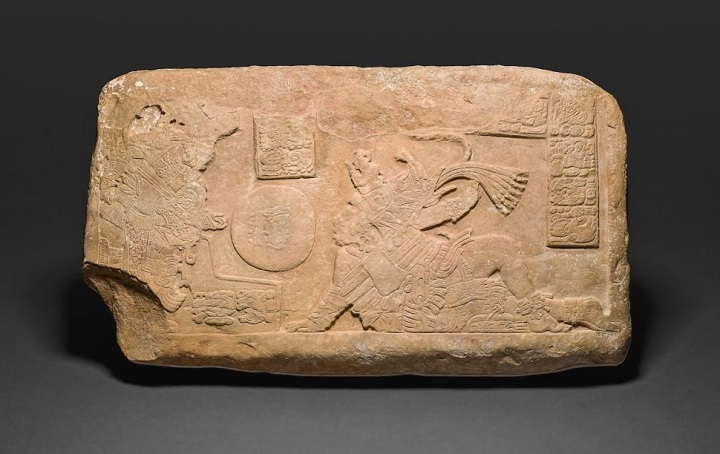 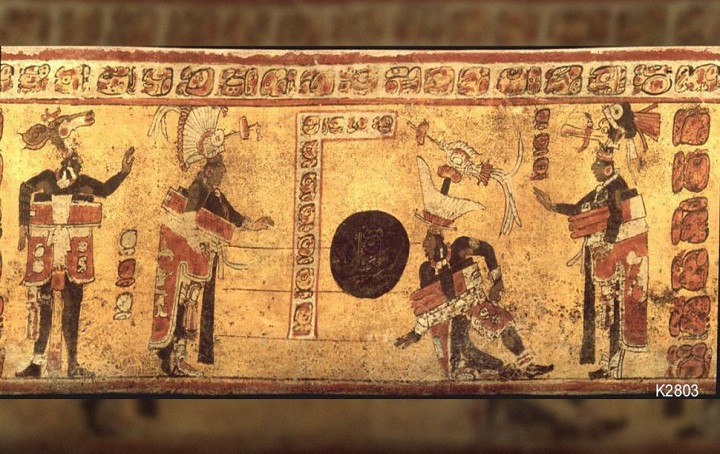 In the religious life of the Maya the ball court was of central importance, a stage between the everyday world and the supernatural.

Archaeologists have pieced together information about the ballgame from different sources: excavations of historic ballcourts, documents from the colonial period (written either by Europeans or indigenous peoples who learned to write in other languages) and from the iconography of indigenous glyphs depicting the game and its players.

The top and bottom of the “I” marked the end zones where players could score. On either side of the long alley were sloped terraces, which would help keep the ball in play if it landed outside the court. The game could be played without those sloping structures, but it was much more difficult.

Experts around the world have recreated the game and have found that the slope dictates how much the ball bounces. The steeper angled the slope, the faster the pace of the game, the quicker the ball bounced back. The more obtuse the angle was, the more easygoing it was.

Archeologists believe that the one at Chichen Itza with its 316 feet long by 98 feet wide (96.5 meters by 30 meters) was more of a showpiece and actually wasn´t for playing since the distances are too great to return the ball without it bouncing on the ground. Most standard-size ball courts are about 65 feet (20 m) long, or about five times shorter than this specific ball field.

The Rules
There has been multiple hypothesis regarding the rules of the Maya ball game. There is no phisycal evidence since most of the Mayan codex were burned by friar Diego de Landa Calderón on July 12, 1562, due to that, archeologists and other experts have gathered information from other sources, however, it is not a 100% accurate.  What experts do know, is that the rules were very similar in all Mesoamerica, since these cultures used to compete against each other.

The best record, regarding the rules was compiled by Dominican friar Diego Durán who for years, interviewed hundreds of indigenous elders about it. Based on Durán’s writings about the game from the early 1570s, this is how the game worked:

There is a modern perception that ballgame players were often sacrificed. Part of this misconception stems from the “Popol Vuh” — an epic that tells the creation myth of one of the Maya peoples. The Popol Vuh began as an oral tradition that was later written down by an indigenous leader, and then recopied by Dominican friar Francisco Ximénez in the early 1700s. In the Popol Vuh, which means “Book of the People” — you can read the full text here, underworld deities battle and use trickery to triumph in a ballgame against humans, whom the deities then decapitate. Then, the twin sons of one of the murdered heroes face off against the underworld deities, and this time the humans win and dismember the underworld lords. In addition to the association between the game and the gory Popol Vuh, this “human sacrifice” myth stems from artwork on some ball courts featuring skulls and bones.

Sometimes royalty would play, in some cases inviting neighboring political leaders to compete in a show of allegiance. But regardless of whether royalty or regular athletes were on the playing alley, the games were heavily attended, with some people losing large sums, even their clothes, because they made big bets, friar Durán wrote.

If you want to experience this spectacular sensation of what a ball game was, enjoy Chichen Itza´s ball court and feel the history under your feet.

Tomorrow, discover with us “El Caracol” of Chichen Itza, one of the world’s oldest observatories