The Yucatan Times presents part II in its new “The Chichén Itzá series”. We will provide you a closer look on the history and main sites and buidings of this amazing new wonder of the world.

In this second part we will discuss the Sacred Cenote. —Read part I—

The Yucatan Peninsula is a limestone plain and water permeates to the underground forming rivers, streams and pools known as cenotes. Cenotes can be completely covered, have a sinkhole or be completely exposed as is the case with the Sacred Cenote.

The Sacred cenote at Chichen Itzá, resembles a small pond of around 60 meters (197 feet) in diameter except, it drops 27 meters (89 feet) to its waters below.

This very specific sinkhole, at some point, was formed from a collapsed cave in the limestone bedrock. To the Mayas, it became one of the greatest repositories of offerings in its ancient days. The water site, to this day, still contains a wealth of information about the Maya civilization settled in Chichen Itzá, and an unparalleled look into rituals of sacrifice.

Named a UNESCO World Heritage Site in 1988, Chichén Itzá is one of the most visited destinations in Mexico. The city, with its iconic pyramids and temples covered in elaborate sculptures, has been an increasingly popular tourism destination for decades.

Cenotes were central in Maya cosmology as the liminal spaces that served as vital portals between the earthly realm and the watery underworld. Through this opening, the deceased passed, and from this opening, humans and deities were reborn.

For the Mayas, water was very sacred and it was believed that “Chac” the rain god lived at the bottom of this cenote. Chac was feared and worshipped because he produced the drought and the life-force of water.

As an entry to the underworld they believed they could speak to their ancestors and the underworld gods by offering sacrifices at the cenote. People offered a diversity of objects for a variety of motivations.

The tossing of precious things into the cenote reaffirmed the resident’s or pilgrim’s dedication to the natural cycles that created life-giving rains so vital to sustaining maize cultivation and the lives of their ancestors. They would ask for good rains and harvests, health and fortune. Priests offered rituals at the temples using the sacred water.

Archaeological investigations in the twentieth century at the Sacred Cenote of Chichén Itzá, recovered human remains and an impressive array of luxury goods, the result of repeated depositions by locals or visitors from faraway places. 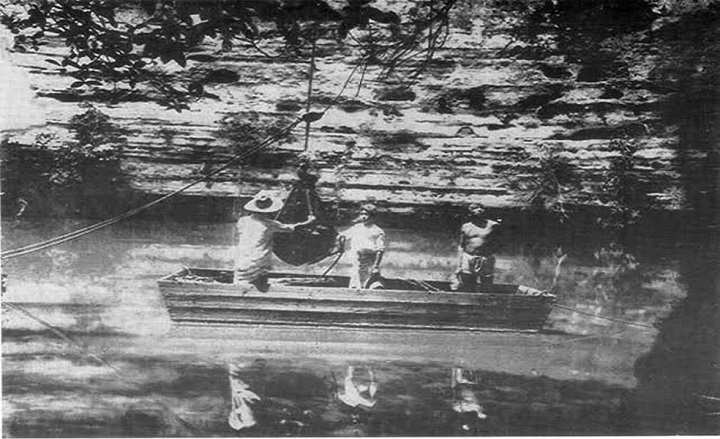 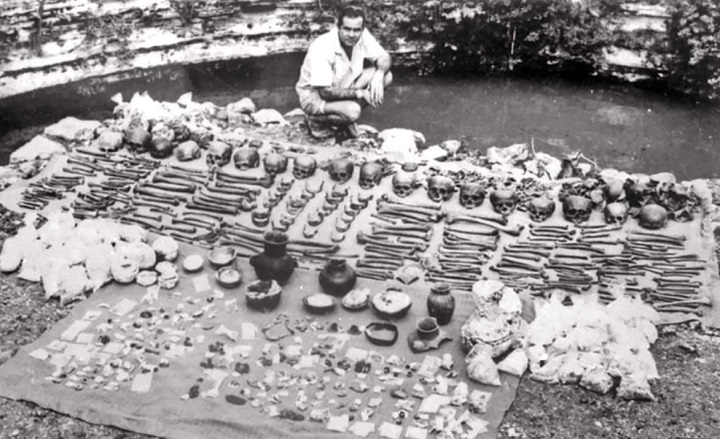 It should be remembered that the name Chichén Itza translates to “At the mouth of the well of the Itza”. The Sacred Cenote was such a place of pilgrimage for the ancient Maya, that many of the objects found there were not native to the Yucatan and pilgrims must have travelled great distances to offer their precious objects to Chac.

When the cenote was dredged they found numerous precious objects including gold, jade, shell, wood, obsidian and wooden objects which were preserved in the water. There were also skeletons of men and children with wounds consistent with sacrifice. Young women were the most common sacrifice presumably because they had power in their beauty.

The Sacred Cenote was used exclusively for religious purposes and potable water was taken from other cenotes located throughout the city.

*On Monday January 6, we will talk about “El Juego de Pelota” -The Ball-game-