Mexican actors Jorge Navarro Sánchez and Luis Gerardo Rivera passed away on Thursday Jan. 16th, during a rehearsal of a scene of Televisa’s TV series “Sin Miedo a la Verdad” (No Fear of Truth).

The Mexican actors died after falling from a bridge, according to a statement posted by Televisa on its Twitter account. 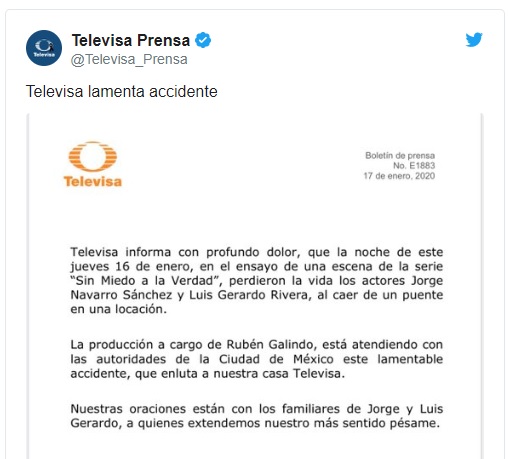 “Televisa mourns, with profound grief, that this Thursday, January 16, during the rehearsal of a scene of the ‘Sin Miedo a la Verdad’ Mexican TV series, actors Jorge Navarro Sánchez and Luis Gerardo Rivera passed away after falling from a bridge in a filming location,” says the post.

In the same document, Televisa informs that the production, in charge of Rubén Galindo, was addressing the accident with Mexico City authorities.

Local media outlets report that the accident would have taken place on a hanging bridge that was part of the setting at a building in the Agrícola Oriental borough in Mexico City.

Several celebrities have expressed their condolences through their social networks after this tragic accident, including soap opera actor David Zepeda, who commented in Navarro’s last Instagram picture, “You will keep shining in the sky.”

Alex Perea, the protagonist of the series, shared a story in his Instagram account: “And in a second… everything changes, in a second, you lose your life, in a second you change the life of many people. In a second…”

The actors
Jorge Navarro Sánchez, of 46 years of age, also participated in the rom-com “Suertuda Gloria” (Lucky Glory) in 2003 in which he interpreted the role of Hernán.

After working in short films and small rare appearances in other productions, he returned to the screen in the Telenovela (Mexican soap opera genre) “Corazón que miente” (Lying heart) in 2016 during seven episodes of drama and romance.

Navarro Sánchez was interpreting the role of Soto, one of the characters in “Sin Miedo a la Verdad.”

The actor also worked in other productions at different occasions like “Como dice el dicho” (As the Saying Goes), “La Rosa de Guadalupe” (Guadalupe’s Rose), and “El Candidato” (The Candidate).

On the other hand, Luis Gerardo Rivera was a theater and TV actor who graduated from the Artistic Initiation School.

He was part of TV series like “El Señor de los Cielos” (The Lord of the Skies), “Blue Demon,” and “Paramédicos” (Paramedics). He also dabbled in cinema as part of the Colombian film “La Pena Máxima” (The Maximum Penalty).

One of his last series as a supporting actor was “Las Buchonas” with Latino actor Joaquín Cosío.

Rivera who was only 30 years old, also made commercials and he was married to actress Celeste Galván.

The TV series
“Sin Miedo a la Verdad,” in which both actors participated, is about a cybernetic hero called Manu that uses a blog under the pseudonym of Gus to protect people who have been victims of injustices like bullying, cyberbullying, sexting, corruption, etc.

Until now, the series had two seasons. The first is called “You’re not alone anymore” and has 21 episodes. The second is called “Wake Up” and has 25 episodes.