U.S. President Donald Trump held a ceremony to sign the USMCA (United States-Mexico-Canada Agreement) — but the pact is far from being a done deal.

“For the first time in American history, we have replaced a disastrous trade deal that rewarded outsourcing with a truly fair and reciprocal trade deal that will keep jobs, wealth and growth right here in America,” Trump proclaimed from the White House lawn on Wednesday.

With staunch support from the U.S. House and Senate to terminate NAFTA (the North American Free Trade Agreement), the United States became the second country to pass and sign the USMCA. This comes about seven months after Mexico gave a 114-4 vote in overwhelming support of the trade deal in June 2019.

Canada, on the other hand, has not yet passed the agreement and still has work to do before the USMCA can be enacted. On January 21, Canadian Prime Minister Justin Trudeau addressed the passage of USMCA, calling it a “top priority” for his country.

“We are going to make sure we move forward in the right way and that means ratifying this new NAFTA as quickly as possible,” stated Trudeau. “The House returns next week, and the very first priority – as you know – is moving forward on the ratification of the new NAFTA,” he added.

Trudeau explained that his minority Liberal government would unveil legislation on January 29 to ratify the USMCA. However, the Conservatives in Canada currently hold the majority; and although they are expected to lend some votes for the passage of USMCA, as Deputy Prime Minister Chrystia Freeland stated on Monday, “the ball is in their court.”

NAFTA, the current North American trade system, has been in effect since 1994 and started gaining criticism from U.S. senators who urged that the agreement needs to be “modernized” in order “to meet the needs of today’s North American economy.”

With the USMCA set to take effect in 2020, there are slated to be Congressional reviews every six years with an end date of 2036, with a possible extension until 2052.

Alongside Canada’s upcoming ratification, another roadblock to the USMCA could includes the potential inability for each of the three countries to meet the heavy obligations required in the new deal. This includes Mexico making sure they are prepared to protect workers’ union rights, as well as all three countries updating their policies on how cars can qualify for reduced tariffs.

Once that action is formalized through an exchange of letters, the agreement will start on course to be implemented “on the first day of the third month following the last notification,” (about 60 days later) according to the USMCA protocol.

Further issues could also arise if Mexico struggles to comply with the amplified requirement of ensuring that at least 40 percent of the parts of a car be produced in plants where workers make at least $16 per hour.

And lastly, although the Trump administration is in charge of implementation efforts in the U.S., there could also be impending implementation issues if he refuses to cooperate with Democrats, who are bound to want a stake in implementation.

Despite the bipartisanship that aided the passage of the USMCA in the U.S. House and Senate, many key Democrats, including House Speaker Nancy Pelosi (D-Calif.) and Minority Leader Chuck Schumer (D-N.Y.) were not invited to attend the signing of the agreement. Asked by reporters if an invitation was extended, Speaker Pelosi’s office responded that no Democrats were invited to the White House ceremony.

So despite the fact that there is a structured timeline for the implementation of the USMCA once all of the preparatory obligations are met by all of the three countries; the U.S., Mexico and Canada are allowed to take as much time needed to meet their obligations — or to confirm that they are satisfied with each other’s laws, policies, and regulations.

by Louie Gasper for The Yucatan Times 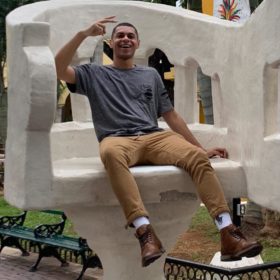 Louie Gasper is a senior at The Evergreen State College in the U.S., majoring in Political Science & Journalism, and is currently studying at the Council on International Educational Exchange’s Yucatán campus. Previously, Louie has interned at C-SPAN. In 2019, he was an intern for NBC News & MSNBC’s “Meet the Press,” the longest-running show in television history. Louie’s interest for politics and journalism stems from his upbringing in the foster care system, where he gained legislative, policy, and storytelling experience by serving in various political roles for child welfare efforts around the U.S.