More than a thousand people took to the streets of downtown Merida to demand the resignation Mauricio Vila Dosal, because of the taxes that will be applied this year.

MERIDA Yucatan (Times Media Mexico) – Around one thousand people are now marching to the International Congress Centre where Governor Mauricio Vila Dosal will deliver a message on the occasion of his first government report.

The protest march is carried out by several political and social groups against the state government administration, this Sunday, January 19, 2020. The protest was announced a few days ago through social networks, and so far, it is one of the largest gatherings Merida has seen in a while, with more than a thousand people participating. 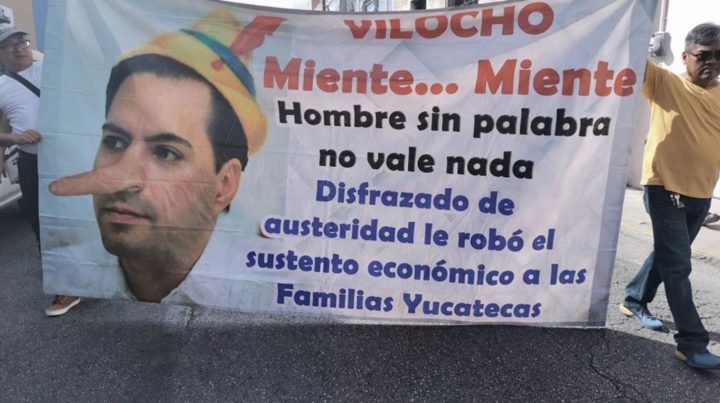 Among the demonstrators are representatives of various associations such as “Voces Unidas”, “Ciudadanos Unidos”, including teachers, citizens, and union members, among others.

The protesters are upset by the taxes that the governor has created for the current fiscal year, as well as some controversial decisions such as the issue of payment for Yucatecan teachers.

The march left the Paseo de Montejo for the event venue whose surroundings are heavily guarded by elements of the Secretariat of Public Security (SSP). The demonstrators ran into a fence on Calle 60 with 35 meters from the CIC. The demonstrators shouted slogans against the government and demanded that security elements allow them to pass.

Faced with the blockade that prevented them from passing, the demonstrators sang the National Anthem next to the fence. Tension rose when several of the protesters tried to tear down the fences and confronted elements of the state police.

Security elements threw pepper gas, which allowed the protesters to retreat, who then left the area. Three people were reportedly arrested for crossing the metal fence. Many people are still concentrated at the protest site.