Over 60,000 missing since the start of Mexico’s catastrophic war on drugs

The devastating human toll of Mexico’s security crisis was laid bare on Monday as authorities admitted nearly 62,000 people had vanished since the start of its catastrophic war on drugs in 2006.

The figure – far higher than a previous estimate of about 40,000 – spoke to the scale of the challenge facing Mexico’s leftist leader, Andrés Manuel López Obrador, who took power in December 2018 vowing to pacify his country.

Since then, however, the number of murders has continued to rise, with more than 31,000 lives lost in 2019 and López Obrador facing growing questions over his “hugs not bullets” strategy to cut crime by fighting its social roots.

Calderón sends in the army

Mexico’s “war on drugs” began in late 2006 when the president at the time, Felipe Calderón, ordered thousands of troops onto the streets in response to an explosion of horrific violence in his native state of Michoacán.

Calderón hoped to smash the drug cartels with his heavily militarized onslaught but the approach was counter-productive and exacted a catastrophic human toll. As Mexico’s military went on the offensive, the body count sky-rocketed to new heights and tens of thousands were forced from their homes, disappeared or killed. 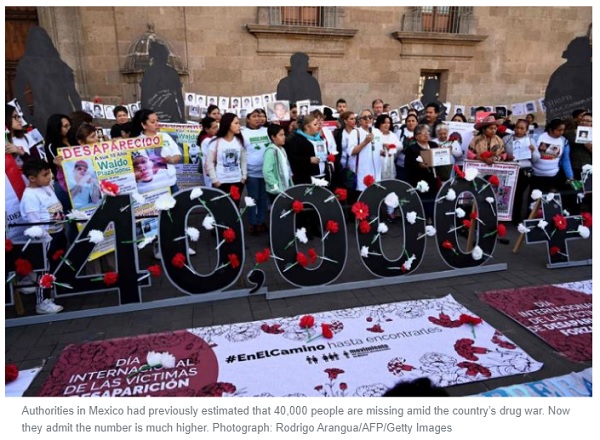 Simultaneously Calderón also began pursuing the so-called “kingpin strategy” by which authorities sought to decapitate the cartels by targeting their leaders.

That policy resulted in some high-profile scalps – notably Arturo Beltrán Leyva who was gunned down by Mexican marines in 2009 – but also did little to bring peace. In fact, many believe such tactics served only to pulverize the world of organized crime, creating even more violence as new, less predictable factions squabbled for their piece of the pie.

Under Calderón’s successor, Enrique Peña Nieto, the government’s rhetoric on crime softened as Mexico sought to shed its reputation as the headquarters of some the world’s most murderous mafia groups.

When “El Chapo” was arrested in early 2016, Mexico’s president bragged: “Mission accomplished”. But the violence went on. By the time Peña Nieto left office in 2018, Mexico had suffered another record year of murders, with nearly 36,000 people slain. 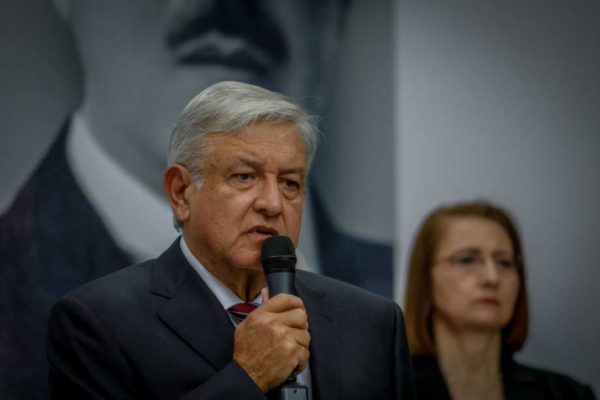 The leftwing populist Andrés Manuel López Obrador took power in December, promising a dramatic change in tactics. López Obrador, or Amlo as most call him, vowed to attack the social roots of crime, offering vocational training to more than 2.3 million disadvantaged young people at risk of being ensnared by the cartels.

“It will be virtually impossible to achieve peace without justice and [social] welfare,” Amlo said, promising to slash the murder rate from an average of 89 killings per day with his “hugs not bullets” doctrine.

Amlo also pledged to chair daily 6am security meetings and create a 60,000 strong “National Guard”. But those measures have yet to pay off, with the new security force used mostly to hunt Central American migrants.

Mexico now suffers an average of about 96 murders per day, with nearly 29,000 people killed since Amlo took office.

On Monday equally horrifying details emerged about the number of people being “disappeared” in Mexico – often by drug cartels, mafia groups or even state security forces.

Only 395 of those victims had been identified, while 243 were returned to their families. Nearly three-quarters of the bodies were found in the states of Sinaloa, Jalisco, Colima, Sonora and Chihuahua – all notorious for the presence of drug traffickers or organized crime. Encinas said 5,184 people had gone missing during the same period.

Karla Quintana, head of Mexico’s recently created national search committee, said those figures took the official number of desaparecidos to 61,637 – nearly all since 2006, when then president Felipe Calderón launched his ill-fated offensive against the drug cartels.

“We have to remember we’re talking here about lives and families and people who are still missing,” Quintana told a press conference in the capital, Mexico City. “These are statistics of horror behind which lie so many stories of such great pain.”

Many believe the true figure could be far higher. “We should keep in mind that disappeared data presented today is incomplete,” tweeted Falko Ernst, a Crisis Group Mexico specialist. “Twelve states have presented no/only partial info … this is but a step toward grasping full conflict scope.”

One of Mexico’s missing is José Barajas, a businessman and father who was seized from his ranch near the US border last April.

Since then his brother, Jesse Barajas, has organized four search missions with support from a newly formed government search commission and protection from heavily armed Mexican troops.

On Monday, as the new figures were announced, Barajas said he had yet to recover his brother’s body but had recently found the remains of an unidentified woman while searching a reeking wasteland in Tijuana.

“It was just a skeleton lying there. It had a bullet to the back of the head,” said Barajas, 62, who documents the searches on Facebook.

Barajas admitted trawling some of Latin America’s most dangerous corners for Mexico’s missing was a perilous task. Not even 20 armoured vehicles would be enough to enter some of the cartel-controlled areas he hoped to search for his brother’s body.

“But we are not giving up,” the mechanic turned activist vowed.

“It’s not just for my brother any more because I don’t think I’m going to find him … We’ve turned over every stone within 20 miles of his house. But these missing [61,637] are all my brothers.”

by Tom Phillips in Mexico City for The Guardian • January 6, 2020