Olympic year kicks off in Tokyo…

The Olympic year of 2020 got underway in Tokyo on Wednesday January 1st, with the new National Stadium hosting its first sporting event, football’s Emperor’s Cup Final.

Construction on the main Olympic Stadium was completed in November and a lavish, curtain-raising ceremony featuring eight-time Olympic gold medallist Usain Bolt was held on 21 December.

Just 11 days later, it had its competitive debut with the match also serving as an official Tokyo 2020 test event.

Blessed by blue skies and a sellout crowd of 57,597, the final was by and large an operational success.

It’s an Olympic year in #Tokyo!

This is what it’s like to walk out at the New National Stadium, the setting for the Opening and Closing Ceremonies and athletics for #Tokyo2020.#visselkobe #kashimaantlers #emperorscup pic.twitter.com/I0O9ln8WGn

This is what it’s like to walk out at the New National Stadium, the setting for the Opening and Closing Ceremonies and athletics for #Tokyo2020.#visselkobe #kashimaantlers #emperorscup 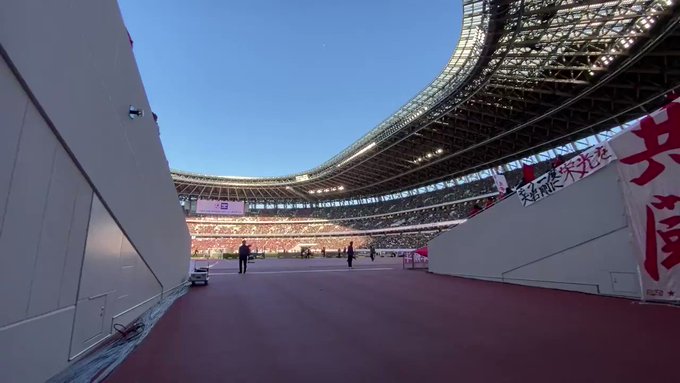 Also known as the Japanese FA Cup Final, the annual New Year’s Day tradition was won by Vissel Kobe who beat Kashima Antlers 2-0 to claim the first major trophy in their history.

The game also brought to an end to the illustrious career of 2010 World Cup winner David Villa, Spain’s all-time top scorer with 59 goals from 98 appearances.

The 38-year-old former Barcelona striker was injured in early December but received a huge ovation as he replaced former Germany forward Lukas Podolski for a brief injury-time cameo.

“It’s been a real struggle for me leading up to this game,” said Villa, who struck 12 goals in 28 games for Kobe this past season.

“In the last league game against (Jubilo) Iwata, I suffered a bad injury that would require four weeks to heal so it was a real fight to be fit for the final and I just barely made it. But I’m glad I was able to end my career with a championship.

“My career is over now. I spent Christmas time trying to make it back for the Emperor’s Cup so I want to devote as much time as possible to my family.”

Having been lured to Japan by long-time international team-mate Andres Iniesta, Villa will return to Madrid to work on his various businesses.

He admitted he will miss playing alongside Iniesta, and says he was impressed by the level of the Japanese game.

“I have a lot of projects going on – my team in Queens in New York and the launch of my academy, DV7. I’ll stay involved in football through projects like that.

“Japanese football puts an emphasis on possessing the ball because all the players are so technical here. It was up to us foreign players to see how we can be the point of difference for the team.

“But after playing in Japan for a year, I’ve been pleasantly surprised by the qualify of football here.

“I had the opportunity to spend a lot of time with (Iniesta) in Kobe and I’ll miss being around him.” – David Villa

Countdown to the Tokyo 2020 Olympics

Wednesday was the first Emperor’s Cup Final to be held at the National Stadium since 2014.

Construction began in December 2016 after the original design by the late Zaha Hadid was scrapped due to spiralling costs.

Japanese architect Kengo Kuma took over the project with the stadium missing its original deadline to host matches at the 2019 Rugby World Cup.

But with those troubles now well in the past, the stadium will provide a fitting setting for the Opening Ceremony of the Tokyo 2020 Olympic Games on 24 July.