When a group of Central American families forded the Suchiate River into Mexico last week, they were greeted by a wall of national guardsmen who locked riot shields and fired teargas into the crowd.

Questioned about the incident, Mexico’s president, Andrés Manuel López Obrador, dismissed it as “an isolated case” and said such scenes were “not the style of this government”.

The very next day, the national guard once again teargassed migrants near the border with Guatemala. News footage showed women and children howling in distress as guardsmen rounded them up and loaded them on to buses.

But 13 months into his presidency – and under the looming threat of US tariffs – Amlo has assumed a new role: immigration enforcer. 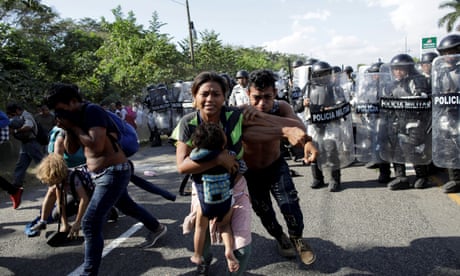 The president has struggled to reconcile his past rhetoric with current actions, claiming good intentions at every turn, invoking human rights and even citing scripture to call for the proper treatment of migrants.

But AMLO has staunchly defended the national guard, a militarised police forced he created last year ostensibly to fight organized crime. Its first deployment was against migrants, even as violence continues to wrack the country.

“The national guard resisted a lot because there was aggression, on the part of the migrants,” he told reporters. “They didn’t fall in the trap of responding with violence, which is possibly what the leaders of these caravans and our political adversaries were looking for.”

Cabinet ministers parroted the same line: “In no way was there an act of repression,” said the interior minister, Olga Sánchez Cordero. “A tragedy was avoided,” said the foreign minister, Marcelo Ebrard.

The National Immigration Institute, meanwhile, said that it had “rescued” 800 migrants – using the word as a euphemism for “arrested”.

As he swept to power in 2018, Amlo promised to end a bitter history of government repression: under successive administrations, soldiers and police have often been deployed to disperse – and disappear – protesters and opposition activists.

“Mexico has a long history of its government acting out against its citizens,” said Esteban Illades, editor of the magazine Nexos.

But the arrival of migrant caravans from Central America has exposed the extreme ideological promiscuity of Mexican politics. Like his ministers, members of Amlo’s coalition have followed the president’s lead and turned against the caravans.

Those who have criticized heavy-handed responses, meanwhile, include politicians from past administrations, whose immigration policies failed to protect migrants against predatory gangs who target them for kidnapping and extorting them.

“They are weaponising the suffering of the people coming here,” Rodolfo Soriano-Nuñez, a sociologist in Mexico City, said of the response from many of Amlo’s opponents.

The debate has played out in the shadow of Donald Trump’s punitive migration policies, and his threats to inflict economic pain on countries that fail to stop the mass movement of people towards the US.

“The Mexican government still has to save face – or at least pretend they can – despite the fact that Trump is dictating Mexican migration policy – that Mexico has agreed to become Trump’s wall,” said Carlos Bravo Regidor, a political pundit in Mexico City.

Like his predecessors, Amlo has found that Mexican presidents struggle to forge a migration policy of their own. 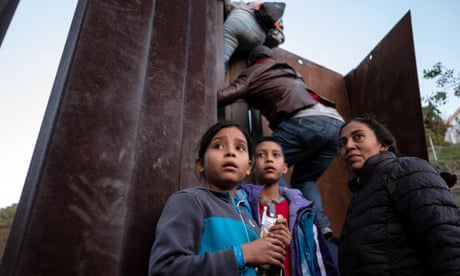 AMLO’s administration initially promised humanitarian visas to migrants, which would allow them to work or study in Mexico for a year. But the initiative was disbanded after migrants simply used the visas to transit the country.

Polls show public opinion has soured on migrants, giving AMLO a free hand to launch a crackdown. As authorities rounded up migrants last week, human rights workers confirmed several cases in which Mexican officials separated children from their parents for up to two days.

“We’re facing an unmanageable scenario,” Carlos Heredia, a professor at the CIDE university, told the newspaper El Financiero. “We sold our soul and we’ve become the wall.”