The UNESCO Creative Cities Network (UCCN) is a project of UNESCO launched in 2004 to promote cooperation among cities which recognized creativity as a major factor in their urban development. As of 2017, there are 180 cities from 72 countries in the network.

With this network, the cities that make it up join another 146, from different 70 countries recognized by Unesco.

The signing of the document took place at Hacienda Xcanatún. Mayor Renán Barrera Concha led the ceremony where mayors and representatives of the other municipalities were present. During the event, it was said that the objective is to build bridges of collaboration and communication with a view to development of creative, different and innovative companies and industries, that contribute to community development from gastronomy, digital design, arts & crafts, etc.

Fréderic Vacheron, representative of Unesco, stressed that cities with this denomination symbolize a revival of their societies, since creativity is the engine of the development of a community.

“When talent is put at the service of development, there is creativity” Fréderic Vacheron said.

“Links between cities are forged to exchange information, support, generate alternatives and work in a coordinated manner towards the same goal: creativity as the axis of development,” he continued. 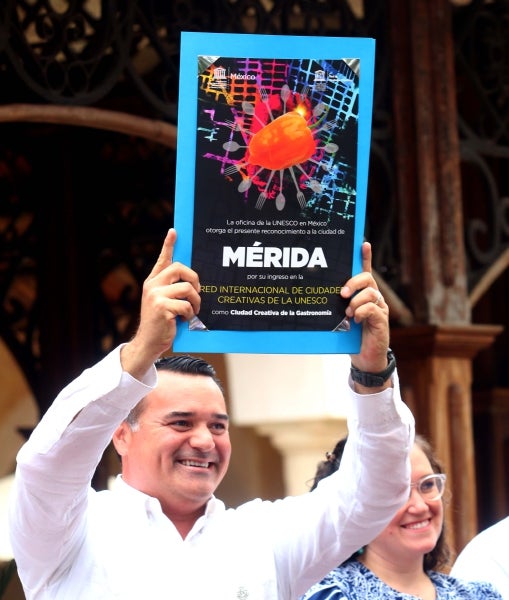 “Mérida was integrated since October last year to a select group of cities of national and international nature recognized by Unesco through the Network of Creative Cities that base their development precisely on that innovation that is carefully exploited through sustained public policies ” declared Mayor Renán Barrera Concha.

“The Mexican Network of Creative Cities of Unesco main element is the commitment to putting creative enterprises at the center of our development strategy and sharing our best practices for citizen benefit”, added the councilor.

“The participating cities seek to lay the foundations for the creative future of our respective communities,” he said.

He also stressed that as authorities the daily challenge is to build the social fabric that characterizes our society, with the profound responsibility we assume as Meridans so that our city remains a reference for citizen coexistence committed to Mexico.

“In the specific case of our Merida, we are a government that cares about creating participation mechanisms, seeking national and international alliances, and, above all, being close to the people that are the hallmark that identifies my administration, because only with a good planning can guarantee the success of the city in the face of the challenges we have and what the future holds, ” the mayor said.

Mayor Renan Barrera continued: “From the local perspective, this meeting guides our actions towards environmental sustainability, the promotion of economic development opportunities with special emphasis on women and young people, to channel the growth and prosperity that we already have with a perspective of equality. Above all, ensure that the quality of life that distinguishes us internationally continues so that our future generations continue to take pride in it”.

“For Mérida it is very important to collaborate in the efforts to achieve important projects, resources and other actions for the benefit of this Mexican Network of Creative Cities that can improve the well-being of the population of each of our entities,” he concluded.