Children soldiers in Guerrero, another sign of the social decomposition in Mexico

About 20 children have been recruited for an indigenous community police force in western Mexico following a deadly attack blamed on a drug cartel.

Some of the children, aged between eight and 14, were handed rifles while others paraded with sticks on a road in the town of Chilapa in Guerrero state.

Last week, 10 indigenous musicians were killed in an ambush as they returned from a party.

The area is rife with gang violence and many villagers create their own police.

The children were being trained to defend their town from attacks by criminal gangs, according to the group which represents the local indigenous people, known by its Spanish initials CRAC-PF.

The children, who all wore olive green T-shirts and had their faces covered with bandanas, lined up on the road leading into the town. They were also pictured carrying out military-style exercises.

More than 20 children lost their fathers when gunmen opened fire on the car in which the Sensación Musical group was returning from a gig they had played the previous day. Some of the boys are reportedly the sons of the musicians killed.

A criminal gang calling itself Los Ardillos has been blamed for the attack. The group has targeted indigenous communities in the past.

Local media said the move was aimed at sending a message to Mexican President Andrés Manuel López Obrador about the lack of security forces in the area.

The president has opted for a non-confrontational approach to the cartels, focusing instead on tackling inequality under a policy dubbed “abrazos, no balazos” – hugs not bullets. 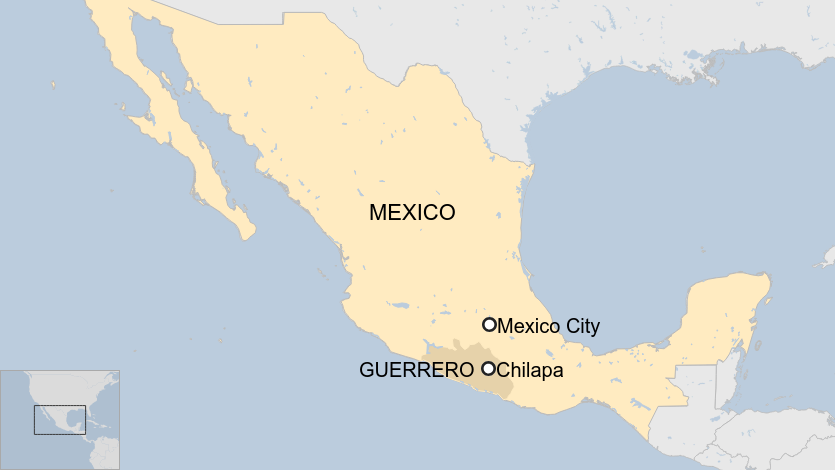 Guerrero is one of Mexico’s most violent states, where drug gangs fight for control of trafficking routes to the Pacific and other parts of the country.

In many rural parts of Mexico, locals create vigilante groups who patrol the area in an attempt to keep the criminal gangs at bay.