Cartel violence could escalate to insurgency in Mexico, experts say

Brussels.— The Armed Conflict Location & Event Data Project (ACLED) expects Mexico to close this year with a new homicide record, while alerting the evolution of drug cartels in insurgent organizations.

In Mexico there is “high risk that the criminal cartel market could evolve into a insurgency movement,” ACLED warns in its report on the 10 most worrying conflicts for 2020.

The signs of alert come from the series of “brutal” incidents recorded last year, and that illustrate how the cartels are increasingly adopting insurgency techniques.

The document mentions the violence unleashed in Culiacán to free Ovidio Guzmán, one of the sons of Joaquín El Chapo Guzmán, from the Army; the slaughter of the Mormon family LeBarón in Chihuahua, and the assault “military invasion style” in Villa Unión, Chihuahua, which left 22 dead just a few days ago.

“Incidents such as the reprisal attack by the Sinaloa Cartel after the arrest of El Chapo’s son increase the fear that [criminal organizations] may appear stronger than the military,” the report says. 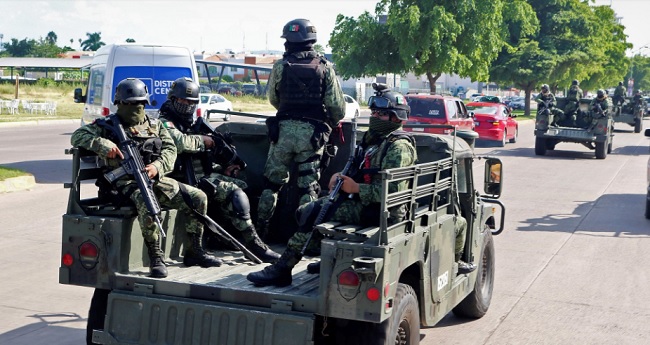 The ACLED is a non-profit association, funded by instances such as the Netherlands Foreign Ministry and the German Federal Foreign Office.

It is headed by Clionadh Raleigh, a professor at the School of Global Studies at the University of Sussex and an expert in political violence. The data generated by the team of experts is used as a reference by academic institutions, research centers and global actors such as the United Nations Organization (UN), the European Union (EU) and the International Committee of the Red Cross.

The report section on Mexico refers to the deterioration of the security situation in 2019, and projects scenarios that could arise during the current year.

Apart from the more than 31 thousand homicides counted in the last 12 months, ACLED recorded in that period 12 thousand 700 events of protest and political violence, as well as more than 9 thousand 200 fatalities.

Although there were riots, protests and acts of political violence throughout the national territory, most of the incidents reported were concentrated in southern entities.

“ACLED‘s coverage of Mexico demonstrates a panorama of current and lethal political violence, dominated by criminal and drug violence,” the document says. “The weak security apparatus, coupled with the fragmentation of armed groups, indicates that the conflict will continue to spread and intensify in 2020, with the possibility of it becoming an insurgency.”

They are also concerned about criticism that President Andrés Manuel López Obrador has been unable to develop a coherent and effective security policy to combat cartel-related violence.

The report points out that the request made by the President to the National Guard to address the problem could prolong the failed militarization of security. He argues that structural violence requires long-term solutions, such as the strengthening of police, justice and prison systems.

“Mexico is facing an increasingly complex, fragmented and multipolar criminal market, and these structural problems are unlikely to be resolved in the short term, which increases the likelihood of the escalated aggravated conflict this year,” he says.

The report anticipates: “It is expected that in 2020 the brutal daily violence will continue incessantly and homicide rates will break records again.”

The study points out that the scale of violence responds to high levels of impunity, poor training of security forces and weaknesses of public institutions, fragmentation of cartels caused by a security campaign aimed at eliminating headlessness, which resulted in a fragmentation of six groups to 37, competing for control of the cartel transfer routes.