15 musicians will be playing tonight at 65 feet on the air!

Lóránt Vörös, general director of the Ilaii Artistic Company, is the man in charge of the creation of this impressive scenic piece in which 15 musicians will play  20 meters suspended in the air, hanging from a special crane, along with nine female actresses, dancers and acrobats on stage, in a show sponsored by the City of Merida.

Gabor Vörös, who is in charge of musical direction, expressed his excitement and pride in being part of this project and highlighted the extraordinary work that has been done by the group of local musicians who take part in the show.

The mayor of Mérida, Renán Barrera Concha, attended the show “Fanfarrias en el aire” that took place on Thursday January 9th, in the framework of the Mérida Fest program for the 478 anniversary of the Yucatecan capital. 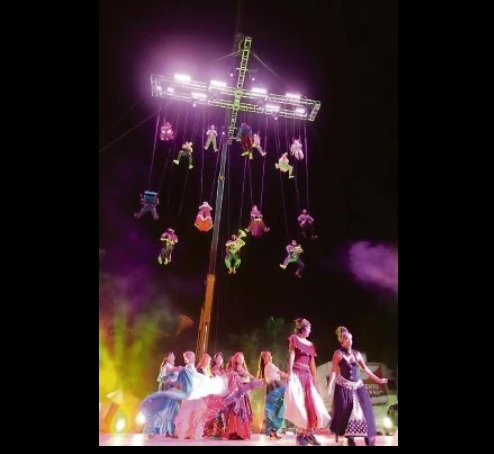 For 30 minutes the Municipal President and the rest of the attendees, enjoyed a show in which 15 musicians with trumpets, saxophones, trombones, percussions, a tuba and a guitar, were suspended in the air at a height of 20 meters, with a crane while nine women actresses and Dancers, as well as acrobats, displayed their movements on stage.

The show “Fanfarrias en el aire” will be taking place right on the Remate de Paseo de Montejo, Friday Jan. 10th at 8 pm; Saturday 11th and Sunday 12th at 7 pm.  See you there!