Yucatan breathalyzer program to be replicated in the Dominican Republic

MALAGA Spain (Times Media Mexico) – In the framework of the XVI meeting of the executive committee of the United Nations Cifal Network, held in Malaga, Spain, the support of the Secretariat of Public Security of the State of Yucatan was highly praised and an exchange program of training was offered to fellow law enforcement members of the Dominican Republic.

The breathalyzer program, implemented in the state of Yucatan to prevent driving under the influence of alcohol, has become an exemplary model at the international level, and has been adopted by security institutions in other countries such as this Caribbean country. 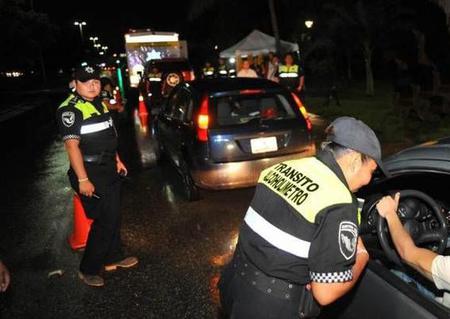 This strategy is part of the actions to preserve and increase the levels of security in the state, among which is the strengthening of the state police through the improvement of its equipment and infrastructure with new patrols and weapons to help facilitate their work, also will make a significant investment for the acquisition of more tools such as surveillance cameras and neighborhood, speedboats, an aircraft, and the installation of new arches plate readers, among other things.

Similarly, in support of human capital, various actions are also being taken to ensure that security elements have the necessary conditions and opportunities, such as a decent salary and social security.

In addition, work is being done on an agreement with the Institute of the National Workers’ Housing Fund (INFONAVIT) to create a special regime, unique in the country, which will enable police officers to have access to a decent home, and they are being supported with 100 per cent scholarships for their children’s university education, including tuition and enrolment, which is supplemented by support of 2,600 pesos every two months, benefits that will be extended next school year to those who are studying at the primary, secondary and high school levels.

Last March, the state of Yucatan received the National Institute of Transit and Transportation of the Dominican Republic and the General Directorate of Land Transportation Security to receive the corresponding training.

Thanks to the joint work with the United Nations Institute for Training and Research (Unitar), Cifal Mérida, and the experience shared by the Ministry of Public Security of the State of Yucatán with colleagues from Santo Domingo, since last August, breathalyzer operations have been carried out on the main roads of that capital city and it has all the legal framework that covers these high impact measures that save lives.

It is worth remembering that through the breathalyzer operation, citizens are invited to make the decision not to drive under the influence of alcohol, in order to avoid traffic accidents and an increase in the mortality rate in the population.

The success of this exchange of experiences would be exported to other member countries of the global network of training centers for authorities and leaders Cifal Network which, being part of the United Nations, work on actions to train professionals and authorities to add to the Sustainable Development Goals of Agenda 2030.

The training offered in March included the identification of necessary resources for alcohol operations, development of programs for driving without alcohol, communication management and accident prevention campaign and participation in a real alcohol checkpoint.

During the annual meeting of the board of directors of the Cifal centers, the organism with local representation, directed by Héctor Navarrete Muñoz, was recognized for the results obtained after the alliance and joint work with the Secretary of Public Security of Yucatán and the Municipality of Mérida, which with its contribution to this program of exchange of experiences allowed that today in Santo Domingo fatal accidents related to the consumption of alcohol are prevented.

At this meeting, it was agreed to continue working on road safety actions with international standards, which will allow society and the government to join forces in preventing and reducing the high rates of road-related fatalities.