Tlalpujahua: the Mexican Magic Town where Christmas is eternal

Seventeen years ago, when Chinese manufacturers sank the industry of hand-painted Christmas ornaments in Mexico, craftsmen from Tlalpujahua, Michoacán, began to think about marketing their blown glass products in specialized stores in the United States.

Talking about a single model, shape, or color is impossible because Tlalpujahua is dressed with an array of geometrical and asymmetrical glass figures which shine as bright as sun rays and reflect the light of the afternoon rays of even the soft lights of the Moon.

The overworked and exhausted fingers of the craftsmen of Tlalpujahua feel, the radiating heat of the 600°C necessary to fuse glass – a result of the heritage a couple left in the town when they brought the technique of hand-made Christmas ornaments to Mexico in 1960.

Almost 57 years since Joaquín Muñoz and María Elena Ruíz learned the technique of glass-blowing for Christmas ornaments, this trade has become a tradition and makes of this Magic Town in Michoacán the best option to decorate thousands of homes for the Christmas holidays.

Alfredo Muñóz, son of Joaquín and Maria Elena, recalls that after spending some time in the United States, his parents returned to Mexico with the knowledge of how to make Christmas trees and the ornaments they had to place on them to make them more attractive. 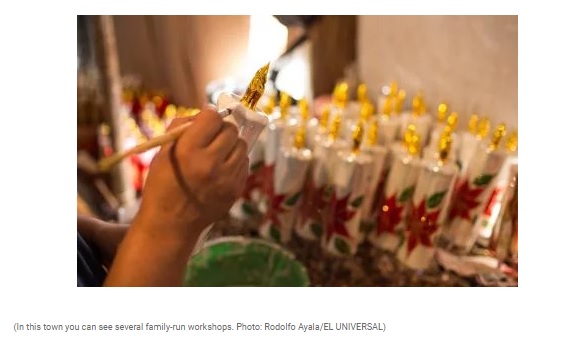 Thus, in 1960 Joaquín got the idea of creating Christmas ornaments and within a short time, he had under his employment over 1,500 people to produce an approximate of 15 million baubles per season.

The workshop was called “Adornos Navideños” (Christmas Decorations) and in time became an even larger source of employment, as it added “Santa’s House”, the “Christmas Village”, and many more attractions where all kinds of Christmas decorations and ornaments were crafted and free shows offered for visitors of all ages.

Nowadays, according to Alfredo Muñóz, this activity represents 60% of the town’s economy and leaves an apportionment from October to December of almost MXN$180 million per season.

Included in this amount are the prices of the ornaments and other concepts such as food and housing, benefiting 27,788 inhabitants such as craftsmen, factory workers, tourist service providers, and suppliers and vendors.

Yet this number is just 5% of the figures reached in 2000 because now all artisans produce and sale, per year, close to 30 million pieces across the national territory, according to this craftsman.

Currently, Tlalpujahua has a little over 400 workshops installed in colorful streets and cobbled streets, where they show their skills in glass-blowing and Christmas bubble decoration to the public.

The Christmas Village has been operating for a year. Its architecture is a prototype of the Bavaria street in Rothenburg, Germany, in honor of the first Christmas bubble makers in history.

Three young students from the Music School of Toluca and middle-school students sing and dance Christmas carols to children and adults, to friends and strangers, on a stage built by the Muñoz family.

For Alfredo and his brothers, it’s a huge responsibility to preserve the technique in the creation of Christmas baubles, being the children of the first craftsmen in Mexico, because the “101 lessons” of their parents have trained several renowned glass-blowers and decorators.

This is why each year they attend international conventions, to modernize their technology and designs, which, upon their return to Mexico, they apply to make sure they offer innovative and trend-setting styles to their clients.

The elegant pieces of the Muñoz family have even crossed borders and adorned palaces such as the Sistine Chapel in Vatican City and the White House in December. 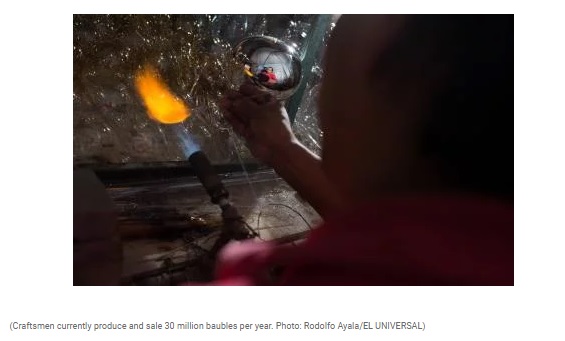 They have also, in quite a few Christmases, decorated the geometric and colorful glasses and trees of the Domus Internationalis Paulus VI and the Vatican Museums, blessed, respectively by Popes John Paul II and Benedict XVI.

As a result, tradition and craft have been passed from a generation to the next, which is why all craftsmen here have come out from the first workshop in Mexico, founded by the Muñóz-Ruiz spouses, supported by their 10 children, to begin the new chapter in the economic history of Tlalpujahua.

You can find any kind of Christmas ornament in this Magic Town, from baubles to bells, centerpieces, and more, and from prices which range from the MXN$3 to MXN$300 according to model, size, and finishing. 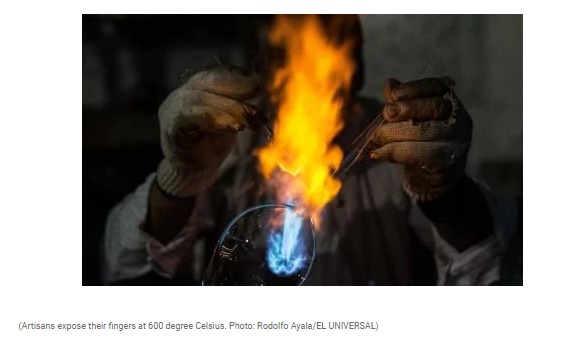 Mr. Javier is an expert on the traditional technique, including glass blowing and modeling at high temperatures

and oversees the entire process until the final decorations of each bauble, a task his wife is in charge of, who became his partner in crime 17 years ago.

This hardy man tells to EL UNIVERSAL that if he could describe his work in a few words it would be “the most beautiful job in the world,” because he dreamed, ever since he was a little boy, about learning how to make a Christmas bauble.

The lights sparkling in the colorful shop windows catch the eye of many but Mr. Vidal says nothing is brighter than the “thousands of people visiting the town during the Christmas season who come to see and admire each bauble.”

The silhouette of Javier Vidal inside his own workshop is flanked by the colonial architecture of the Church of Our Lady of Carmen, as each exhalation from Mr. Vidal shapes a new ornament. 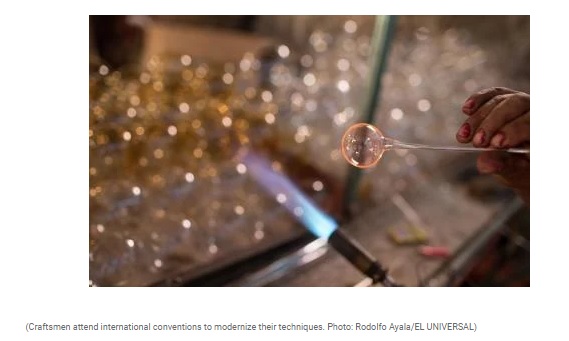 In front of Mr. Vidal is his wife, Lilia, who works on the plating, decoration, and the hand-made finishing touches of the Christmas ornaments.

In his workshop, like in all the others in Tlalpujahua, Mr. Vidal displays the works he has learned to create throughout an entire career, dedicated to seeing a smile on the faces of the clients and tourists who delight in this product, Christmas ornaments, a source of pride for both, Mexico and Michoacán.