These Mexican ants are capable of producing honey

In Mexico there is a species of ant that is capable of producing and collecting honey. Are you familiar with it?

The Mexican ants that are capable of producing and collecting “honey” are of the species “Myrmecystus mexicanus” and although they are present in the warm and dry regions of the planet, the best known are those found in San Luis Potosí, Hidalgo, Veracruz and Oaxaca.

Commonly called “honey ants”, being in a habitat where there are hot climates and food shortages for these insects, they have developed the ability to store nectar in their abdomen and feed it to the ants of the colony.

A worker ant collects the juices and dew from the plants, and then introduces them into its abdomen, swollen with the nectar collected, where other workers extract it.

Commonly it is the offspring the ones that usually nourish themselves with the honey, but in times of scarcity they can get to feed the adult ants as well.

This species of ants spend most of their life, if not all, immobile within the nest, either receiving or providing the nectar, so that once the larvae or their peers consume their storage, they die. 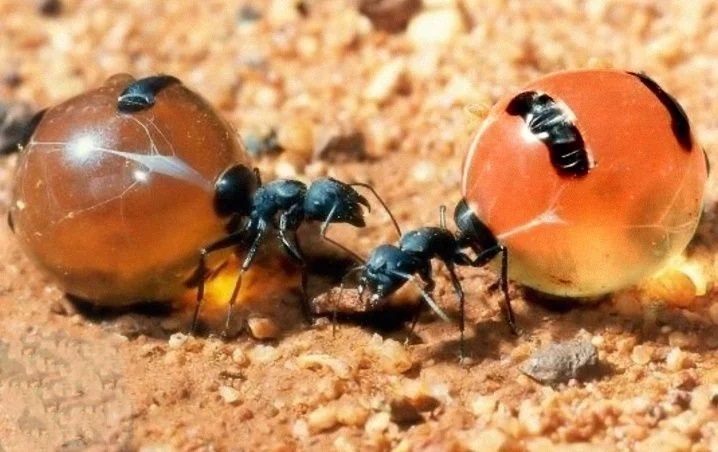 Some UNAM (National Autonomous University of Mexico) researchers indicate that the edible insects have always been part of the diet of many ethnic groups around the world. Some people say that it has a very particular flavor, a little fermented, acidic, sweet and savoury all at the same time.

These ants produce a curious honey that, traditionally, is used as medicine, and has been used to alleviate illnesses, to treat otitis, infections in the mouth and even to keep a fever under control.