Residents of Río Lagartos, Yucatan to receive free purified water for one year

Residents of the Rio Lagartos municipality, in eastern Yucatan, will receive purified water, part of the mayor’s work for the people.

Citizens of Rio Lagartos, in eastern Yucatan, will receive free purified water for a year after two companies joined forces to establish a purification plant in town.

“The two companies, Aquaclyva and Orizon, will establish a water purification plant thanks to an investment of 13 million pesos, which will provide service to the population”, announced Río Lagartos mayor Erick Alcocer.

The agreement was signed in Merida where the mayor himself came to sign the document.

However, Alcocer was accused in recent days of leaving town without notice, while municipal officials and employees made a public protest in Las Coloradas complaining of lack in payments to the councilmen of the City Hall (Cabildo).

These accusations have turned the local population against the municipal president, and according to many, that is why mayor Erick Alcocer wants to give them free purified water for one year. 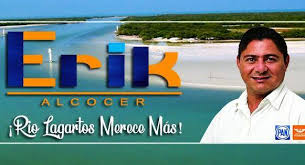