Nearly 65% of the US below-freezing temperatures this week

UNITED STATES (National Weather Service) – It’s going to feel more like mid-January than early December this week as extreme cold temps move across the United States. About 65% of the country will experience below-freezing temperatures, according to the National Weather Service and CNN meteorologists Taylor Ward and Dave Hennen.

The system moving eastward has already hit parts of the Midwest, which saw heavy snow and limited visibility in places like Iowa, where about 50 cars were involved in a pileup Monday morning.

Multiple car pile up on I-80 westbound lane. Conditions continue to improve in central Iowa but same winter conditions will impact eastern Iowa through the early afternoon. https://t.co/3qi2aouUoA pic.twitter.com/YfzwRzuyVH

The upper Midwest will see highs below zero Tuesday and even colder on Wednesday, advisories have already been issued for a portion of the Dakotas and Minnesota.

COLD! Here’s a look at the forecast temperatures and wind chills (what it will feel like) for Tuesday and Wednesday morning. Bundle up and cover exposed skin #mnwx #wiwx pic.twitter.com/6N6vdYlqXH

Over a foot of snow is possible in some areas of the region and in the northern Great Lakes.

“It will continue to be bitterly cold from eastern Montana to northern Michigan with widespread subzero lows and single digit highs,” the National Weather Service said in its short range forecast.

The cold front will eventually bring “an arctic airmass” to the Mid-Atlantic and Northeast by midweek, NWS said.

A band of snow will develop 2,000 miles from Texas to Maine as a result of the arctic air combined with the frontal system moving across the eastern US, Ward and Hennen said.

Cities like like Dallas, Little Rock and Memphis could see light snow, with minor accumulations, the meteorologists said. About 1 to 3 inches are possible in Nashville, Washington and Philadelphia. The area from Boston to New York might have to deal with 2-4 inches.

Mexico
In Mexico, the National Weather Service forecasts that the 22nd cold front, will travel through northeastern and eastern Mexico. 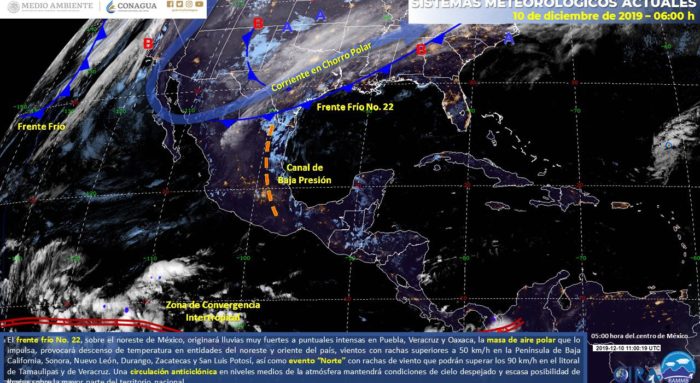 It foresees that this system will cause very heavy to occasional heavy rains in Puebla, Veracruz and Oaxaca, and that the mass of polar air that drives it will cause a drop in temperature in entities in the northeast and east of the country, winds with gusts above 50 km / h in the Baja California Peninsula, Sonora, Nuevo León, Durango, Zacatecas and San Luis Potosí, as well as the “North” event with gusts of wind that can exceed 90 km/h on the coast of Tamaulipas and Veracruz, conditions that will extend to the Isthmus and Gulf of Tehuantepec.

An anticyclonic circulation in average levels of the atmosphere will maintain clear sky conditions and little possibility of rain over most of the national territory.

For the next few days, the Yucatan Peninsula will have clear skies with increased cloud cover in the afternoon and intervals of showers in Quintana Roo, as well as isolated rains in Campeche and Yucatan, hot environment and south and southeast wind from 10 to 25 km/h.