Fragments of pre-Aztec murals recently discovered on the outskirts of Teotihuacan, what was once the largest city of the Americas, are adding to mounting evidence that even commoners enjoyed the finer things in life there.

Each year, millions of tourists visit Teotihuacan and its towering pyramids and temples, which are located far from the latest discoveries found on the city’s southern edge.

“We’re now finding that life on the periphery was pretty good,” said Boston University archaeologist David Carballo, who discovered brightly-colored paintings over fine stucco on three buildings he began excavating there in July.

The murals are decorated with flowers and birds that appear to be singing, evoking a paradise found nearly three kilometers from Teotihuacan’s center came as a complete surprise, he said.

Carballo and his team have also found other signs of wealth nearby, including jade, a finely carved stone mask, and shells from Mexico’s Pacific and Gulf coasts.

The unpublished mural discoveries point to the radically different path charted by Teotihuacan, which thrived from about 100 B.C. to 550 A.D., compared to other ancient civilizations.

At a time when daily life in the biggest contemporary Mayan cities, or ancient Rome and Egypt, was marked by a small elite lording over impoverished or enslaved communities, most of Teotihuacan’s estimated 100,000 inhabitants fared far better.

Near where the murals were found in Teotihuacan’s Tlajinga district, Carballo and his colleagues also excavated what would have been a bustling obsidian workshop that likely produced an estimated 200,000 blades during its lifespan.

In the city’s La Ventilla district, another aspect of Teotihuacan’s egalitarian character comes into view: stone, multi-family apartment compounds where over 90% of Teotihuacanos lived.

Lying 48 km northeast of Mexico City, Teotihuacan has more than 2,000 such compounds, thanks to a century-long building boom that ended around 350 A.D.

According to Ruben Cabrera, an archaeologist who pioneered excavation of La Ventilla, Teotihuacan’s mass housing is unprecedented in antiquity, pointing to lower inequality.

“It wasn’t as pronounced as, say, Rome or other places where there was a dominant group and a dominated group,” he said.

No evidence of slavery has been found there in more than a century of excavations, he noted. 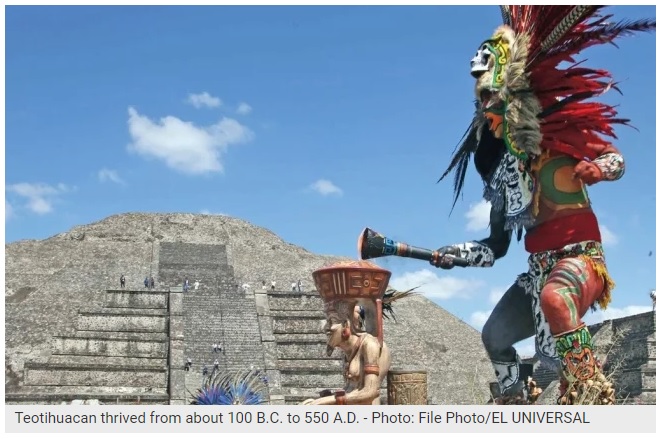 A city of migrants

Arizona State University archeologist Michael Smith, who leads a research lab at Teotihuacan, previously calculated a measure of wealth for the city based on its house sizes.

On a scale where 1.0 means one household owns everything and zero indicates total equality, Teotihuacan’s so-called Gini score came in at 0.12, which Smith described as a stunningly low level of inequality for a pre-industrial society.

“My first reaction was: ‘This is a mistake,’” he said.

Smith, the author of the book “Ten Thousand Years of Inequality,” plans to recalculate the score using a larger data set. While expecting it to rise somewhat, he says it will probably still be far lower than scores for Roman Pompeii or Egyptian Kahun.

The average Teotihuacan household had around 200 square meters of living space, roughly the size of a tennis court, while typical Aztec dwellings measured about 25 square meters.

Burial data compiled by Carballo shows that Teotihuacan’s commoners grew to a height similar to elites, with males buried in apartment compounds less than 1 centimeter shorter than those interred near the city’s central Moon Pyramid.

In contrast, commoners were over 6 cm shorter than royals in Mycenae, Greece, and 9 cm shorter in dynastic Egypt, data has shown.

She first excavated an apartment compound in the mid-1980s on its northeastern outskirts where stucco workers lived and had access to luxury goods including mica and fine ceramics.

Refugees fleeing areas buried under ash were likely absorbed through work programs in a city that placed a higher value on social groups than individuals, resulting in social classes less sharply divided by access to resources, Manzanilla argues.

About a third of Tlajinga’s residents may have been migrants, earlier digs based on tooth signatures revealed, and foreigner enclaves have been found across Teotihuacan with at least four foreign languages spoken aside from the local tongue, likely a precursor to Aztec Nahuatl or Otomi.

As a result, Teotihuacan’s history offers an intriguing counterpoint to modern tensions often stoked by migration.

“We should learn from its more than five-century run,” she said.