The worldwide diversity of Christmas in its various cultural forms is an interesting study. The essence of the holiday – a celebration of the incarnation and birth of Jesus Christ – is the same throughout Christendom. The holiday has a real power to inspire art, literature and folk customs, and express itself in various manners in diverse cultures.

Real celebrations come from the people, and are not imposed by governments to promote an agenda. In Mexico, Christmas is a true folk celebration. Mexican Christmas customs are an eclectic mixture of the old and the new, including elements from Europe, elements developed in Mexico, and, in recent years, elements borrowed from the USA. 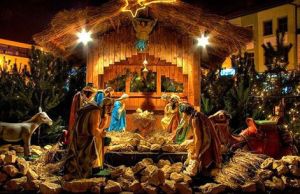 One prominent aspect of the Mexican Christmas season is the widespread use of the nacimiento – the crèche or nativity scene. It is often more elaborate than those used in the United States. Its ceramic figurines includes interesting elements such as the nopal cactus, hermits and ducks. (I’ve even seen ducks with halos!). My Mexican wife has fond memories of the nacimiento which belonged to her late grandmother.

The piñata is probably the most famous Mexican Christmas custom, although it is not exclusively a Christmas custom. In fact, the piñata is used throughout the year at children’s birthday parties, suspended in mid-air and struck repeatedly until it breaks.

In the US, the most famous piñata is in the form of a donkey, but nowadays a piñata might be in any form. For example, you might see a Bart Simpson piñata or a Spiderman piñata.

The piñata used at Christmas time though is a ball with spikes. In colonial times a piñata in the form of a big ball (representing Satan) with 7 spikes (representing the 7 capital sins) was used by the friars as a teaching device. Thus, breaking the piñata represented defeating Satan. 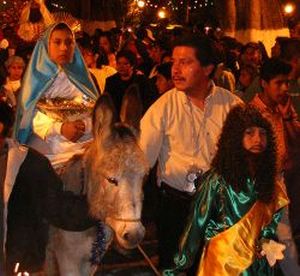 Another Christmas custom is the posada, which superficially bears some resemblance to the Christmas caroling celebrated in English-speaking countries. However, the singing in the posada is a ritualized musical drama. The people outside sing the part of Mary and Joseph, the people inside sing the part of the innkeeper, and finally those outside are invited inside for the party.

The Mexican pastorela is a genre of Christmas play. Its roots go back to the mystery and morality plays of medieval Spain. The pastorela focuses on the shepherds, pastor being the Spanish word for shepherd. In the pastorela, the shepherds hear from the angel about the Christ Child, and they set out for Bethlehem to see Him. Along the way they encounter the Devil, who puts various temptations in their path to prevent their arrival at the manger. Each shepherd is tempted by a particular sin. But they resist the temptations and at the end of the play, they reach the Christ Child.

In more recent years, Gringo customs such as Santa Claus and Christmas trees have been adopted in Mexico. Actually they have been assimilated quite well into the culture.

During the season, stores do a brisk business in Christmas trees. I recall one December in Mexico City, seeing a gigantic artificial Christmas tree in the Zocalo (the main plaza in Mexico City.) Santa Claus is well-known in Mexico now, and many small children eagerly await his annual visit.

One curious result of the adoption of Christmas customs from the US is seeing snow-related decorations in regions of Mexico where it hardly ever snows.

Just as in the USA (and maybe everywhere it’s celebrated) Christmas is very commercialized in Mexico. But maybe that’s inevitable, because the main reason it’s commercialized is the holiday is important to people.

As long as you remember the real reason for Christmas, and as long as you don’t go into debt buying presents, that can be a very good thing. It’s certainly good for the commercial economy. In fact, a lot of stores do a big share of their business during the season.

In conclusion, allow me to wish all the readers of Banderas News a Happy Holiday Season, or as they say here in Mexico – ¡Felices Fiestas!

Allan Wall, who recently moved back to the U.S. after living, and teaching English, in Mexico for a decade and a half, continues writing articles about various aspects of Mexico and Mexican society as viewed from south of the border. Some of these articles are about Mexico’s political scene, history and culture, tourism, and Mexican emigration, and can be read on his website at AllanWall.info.