(Bloomberg) — On paper, Mexican workers should be big winners from the new Nafta. They’re not holding their breath.

Stronger unions and higher pay south of the U.S. border are a key part of the revamped trade deal, which the U.S. House of Representatives is due to vote on Thursday. The measures are supposed to bring knock-on benefits for the U.S. and Canada too — by eating into a wage gap that’s lured factories and jobs away.

The worry is that any new rules in Mexico will largely remain on paper. Mexican workers themselves, who watched their pay fall even further behind during a quarter-century of the North American Free Trade Agreement, say there’s reason to doubt if its successor will be much different.

“I don’t think there will be any change,” said Ludwing, a security guard at a General Motors plant in the industrial center of Toluca who asked to be identified only by his first name. “I’ve seen my friends fired as plants close down.”

GM Mexico spokeswoman Teresa Cid said the company will honor the changes to Mexico’s labor rules as they are implemented. 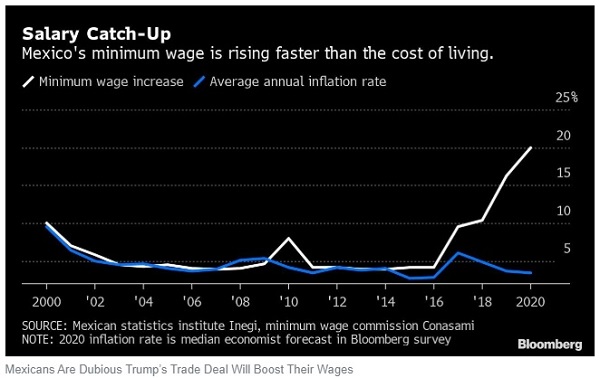 The USMCA, as the trade deal is known, requires that 40%-45% of auto content be made by those earning at least $16 an hour — a move aimed at reducing Mexico’s low-wage advantage in the region. It also guarantees the right of Mexicans to choose their labor unions and contracts.

The problem is that Mexico’s unions have a history of cozying up to bosses, rather than fighting for the workers they’re supposed to represent — and new labor rules can’t change that culture overnight. Unions are vigorously fighting the new rules on several fronts, including filing hundreds of lawsuits, which is fanning fears that the pace of reforms could stagnate.

That concern triggered a last-minute row on the weekend, when Mexico accused the U.S. of infringing on its sovereignty by dispatching inspectors to enforce Mexican labor reforms.

The issue was chalked up to a misunderstanding and resolved quickly. But Mexico’s labor practices were a key hurdle in the final negotiations last week for the White House to get Democrats — and allied U.S. unions worried about job losses — behind the deal.

Vazquez, a shelf stacker at a Walmart in Mexico City for 16 years who asked to be identified by his last name for fear of retribution, said he’s skeptical the deal will benefit him.