Violent events reported at the women’s protest at CDMX;

In Mexico City, groups of demonstrators committed acts of vandalism in different parts of the city.

CIUDAD DE MEXICO (Times Media Mexico) – The women’s protest in Mexico City against gender-based violence and police aggression got out of control when groups of women vandalized everything within their reach. Painted walls, destroyed windows and damaged historical monuments in their path.

The capital’s police sent female police to guard a convoy of male officers who entered the burned station. Protesters shouted at the female officers, “traitors”, “They will rape you, too”.

Women from different cities in the country took to the streets to peacefully protest against gender violence however in Mexico City things got out of control.  Women started getting violent and begin throwing rocks and sticks against male police officers. A male bystander was attacked, spray painted and gasoline was pored on him, they wanted to set him on fire, police had to intervene. 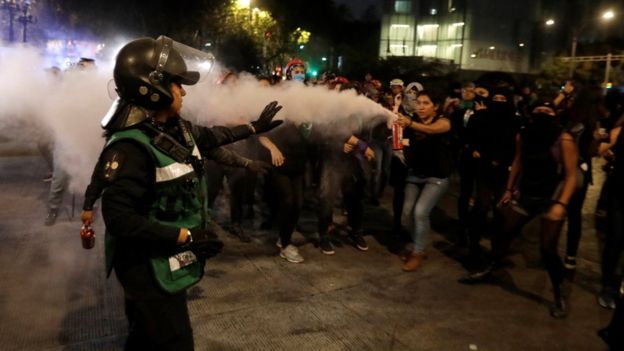 Feminist contingents began to arrive at the Insurgents’ Roundabout, in the Cuauhtémoc mayor’s office, Mexico City, with banners in hand, which read “demanding justice is not provocation,” “they are killing us and you are not doing anything”.

Several women wore green scarves, a color that symbolizes the struggle for the decriminalization of abortion, as well as purple scarves, with which the feminist movement is identified.  Others were dressed in black, with their faces covered.

In the capital of the country, the collective made a petition demanding “Gender Alert”, sanctions for the leakage of information from investigations; some claim the police is responsible for violations against women.

At the corner of Genoa Street and Reforma Avenue there was a confrontation with those who tried to prevent them from painting the anarchist sign; two elderly men and a woman who were arguing with the demonstrators ended up giving in order to avoid an event with greater consequences.

By the Mexican Stock Exchange building, demonstrators set fire to the plastics that the authorities used to protect the historical monuments. The police women that followed the protest had to use fire extinguishers to smother the fires caused by the demonstrators.

Urban furniture in the roundabouts of La Palma, Hambugo and Cuitláhuac were affected by vandalism, with hammer blows.

The origin of the protest is the escalation of violence against women.

The demonstrators did not allow men, not even reporters or cameramen, to approach the contingent. Those who tried to get close were outnumbered by demostrators. The group that had concentrated on the Insurgents’ Roundabout gathered in front of the Public Security Secretariat, which was armored by three rows of female security elements.

For at least a decade, different voices have spoken out on the urgency of addressing the phenomenon of systematical violence suffered by women in Mexico. However, a series of feminicides registered in Mexico City was the trigger for placing the issue of violence against women on the political agenda.

In August, a young underage woman denounced having been a victim of rape and pointed to police officers attached to the Mayor’s Office of Azcapotzalco as responsible. The victim and her mother denounced that the uniformed men took the minor into their patrol car when she was a few streets away from home.