US Government worried about AMLO´s failed strategy against Cartels

MEXICO CITY (EFE) – The massacre in northern Mexico of nine members of a Mormon community, including six children, once again exposes the country’s security weaknesses and has led U.S. President Donald Trump to offer unprecedented military aid to end the cartels.

On another black day in a Mexico, sadly accustomed to violence, a cruel slaughter was recorded on Monday when an armed group murdered nine members of the LeBaron Mormon community.

the U.S.’s uncomfortable “help”.
The slaughter has acquired a binational connotation considering that the LeBarón family, are originally from Utah (USA), and had dual nationality. On Tuesday, November 5, Donald Trump wrote on Twitter: This is the time for Mexico, with the help of the United States, to wage WAR on the drug cartels and wipe them off the face of the earth. We merely await a call from your great new president!

This is the time for Mexico, with the help of the United States, to wage WAR on the drug cartels and wipe them off the face of the earth. We merely await a call from your great new president!

Trump’s offer of help to “get involved and get the job done quickly and effectively” took Mexican President Andrés Manuel López Obrador by surprise in the middle of a morning conference.

“It is a matter for us to attend to. To the Government of Mexico, independently and asserting its sovereignty,”

Two days after the failed October 17 operation against Ovidio Guzmán, son of Joaquín “el Chapo” Guzmán, in Culiacán, Donald Trump expressed his “solidarity” with López Obrador and officials from both nations met to accelerate a program to freeze arms trafficking from the United States to Mexico.

Javier Oliva, a security specialist at the National Autonomous University of Mexico (UNAM), told EFE that this event has led Trump to react because it reflects that “Mexican authorities do not have the capabilities to fight the narcos”.

In the United States, U.S. Senator Ben Sasse, a member of the Senate Select Committee on Intelligence, issued the following statement: 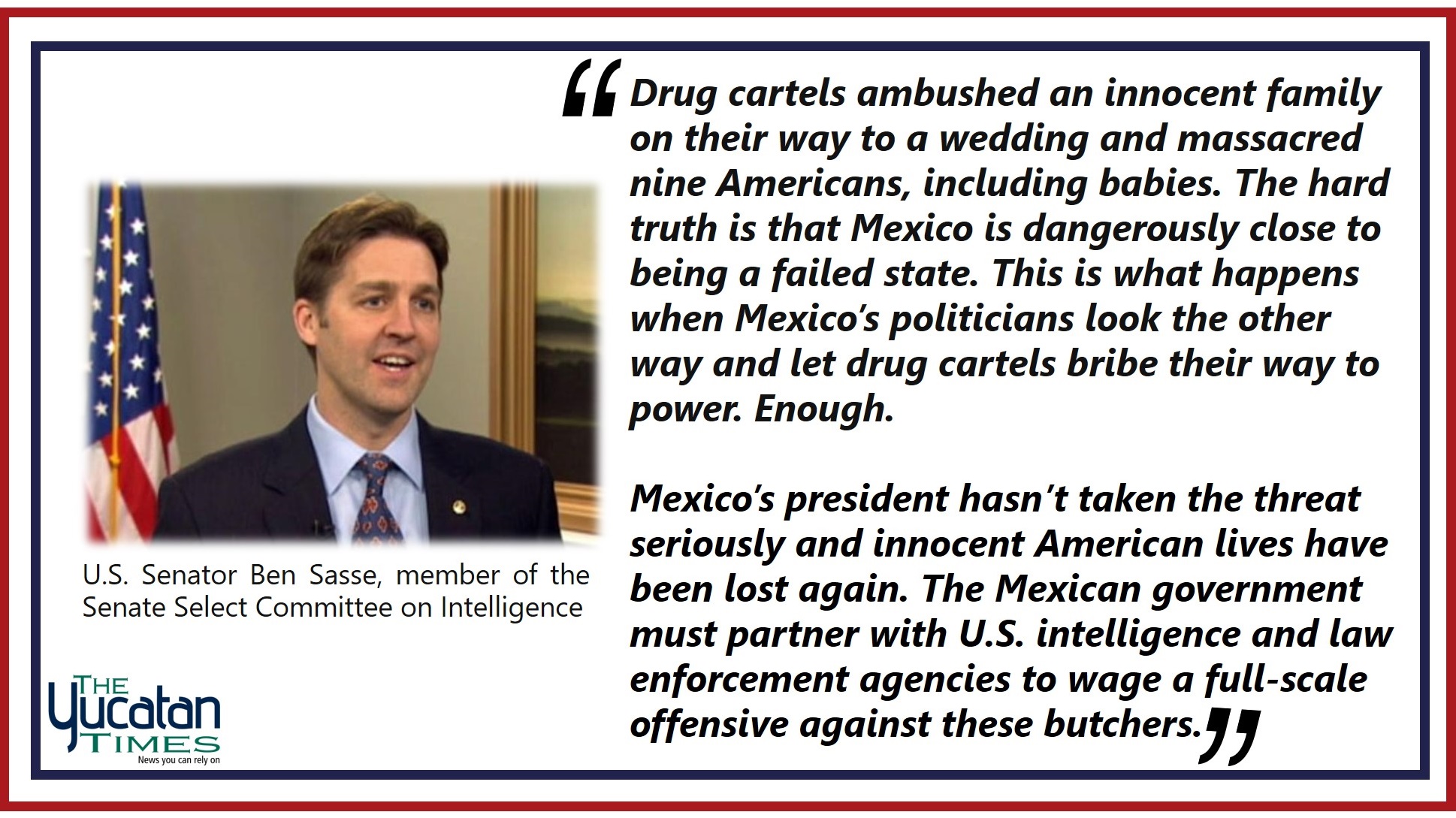 Another one who expressed its discontent with the Mexican failed strategy against cartels was Lindsey Graham a senior United States Senator from South Carolina, since 2003. Since 2019, he has been the “Chair of the Senate Committee on the Judiciary”. In an interview he said he’d rather “go to Syria” than parts of Mexico

Senator Lindsey Graham (R-SC) says he’d rather “go to Syria” than parts of Mexico after nine Americans were killed in an attack by suspected cartel members https://t.co/PA24ap2JXF pic.twitter.com/BLCbNy9SQt

Violence in Mexico
According to official, government figures —all of them denied by López Obrador— there were 25,890 murders between January and September, 2.4% more than in the same period of the previous year. If this continues, Mexico will close 2019 as the most violent year ever, despite the Executive’s efforts to strengthen security and change strategy, addressing, as they claim, the causes of the phenomenon.

In this context, the massacres have become a fateful national reality. In mid-October, in a 24-hour interval, 13 Michoacán state police officers were killed in an attack by an armed group, and hours later one soldier and 14 alleged sicarios were killed in Guerrero. Two months earlier, in August, a massacre in a bar in Coatzacoalcos, in the state of Veracruz, left 30 people dead.

Mexico´s violence is spiraling out of control.