The historical figure of “La Malinche” a character shrouded in myth

Malinche’s story can be interpreted in different ways. She has been known as the mother of Mexico, and even Mexico’s Eve (the son she had with Spanish conquistador Hernán Cortés was likely the first mestizo person, of European and indigenous Amerindian heritage), yet Malinche’s name is also associated with betrayal.

Her life, shrouded in myth, is also a tale of legendary events confirmed by artifacts and eye-witness accounts. Today, some see her as a historic traitor, whose relationship with Cortés helped the Spanish brutally enslave Mexico. Others see her as a brilliant communicator who effectively negotiated ways to prevent the Spanish from making their conquest of the Americas even more violent and bloodroot.

Some say Malinche was born to a noble Aztec family around the year 1500, others place her as originative from the Olmec people who lived in the shores of the Gulf of Mexico. Fact is that she was given the name Malinali, which converted to Malintzin when addressed with respect, which the Spanish pronounced Malinche (eventually the Spanish called her Doña Marina). 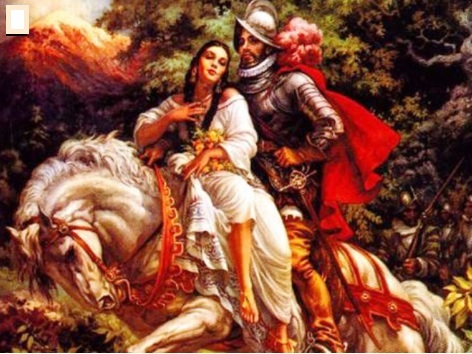 She spent her early life growing up in the Nahuatl-speaking borderlands of the Aztec and Maya empires. Her father died when she was a little girl, and when her mother remarried, she was sold to Mayan slave traders. As a slave she learned to speak Maya, acquiring bilingual skills that would later serve as a crucial link for communication between the Spanish conquistadors, the Maya and Aztec (as she was also one of the first natives who learned Spanish).

In 1519, after a battle between Mayas and Spaniards, 20 young slave women were offered to the Spanish. Malinche (thought to be in her early twenties) was among them.

Hernán Cortés soon learned of Malinche’s valuable mastery of the indigenous language, and she began accompanying him to meetings, along with the Maya speaking Spanish priest Geronimo de Aguilar, who had lived with the Maya for eight years after his ship hit a sandbar off the coast of the Yucatan Peninsula.

The three met with representatives of Moctezuma II, ruler of the great Tenochtitlan, capital of the Aztec Empire (later destroyed and rebuilt by the Spaniards as Mexico City).

Malinche spoke with the representatives in their native Nahuatl and interpreted their words into Maya, which Aguilar then interpreted into Spanish for Cortes. As time went on, Malinche quickly learned Spanish and became Cortés’s exclusive interpreter. The two of them developed a close relationship.

Illustrations from that period in time nearly always picture the two together. Records also indicate that Malinche informed Cortes of an Aztec plot to destroy his army and put an end to their plans of conquest. Cortés himself stated in a letter that “After God, we owe this conquest of New Spain to Doña Marina.” Interestingly, Nahua wives in elite classes were traditionally active in helping their husbands in fulfilling their diplomatic and military objectives. In 1523, just a year after the Spanish army overtook Tenochtitlan, Malinche gave birth to Cortés’s son.

Shortly afterwards, Cortés’s Spanish wife arrived in Mexico and he arranged for Malinche to marry conquistador Juan Jaramillo. However, Malinche went along with Cortés on a military mission to Honduras. When she returned to Mexico, she gave birth to a daughter fathered by Jaramillo. Not much is known of her life beyond this point in time, it is not clear when or how she died.

Bernal Díaz del Castillo, who marched with Cortés and wrote the book “Historia verdadera de la conquista de la Nueva España” (True story of the conquest of the New Spain), claims Malinche was beautiful and intelligent, she could speak Nahuatl and Maya. Without her, he says, the Spaniards could not have understood the language of Mexico. Díaz’s account is the most generous of any conquistador, but it was written decades after the conquest—his eyewitness history filtered through memory. 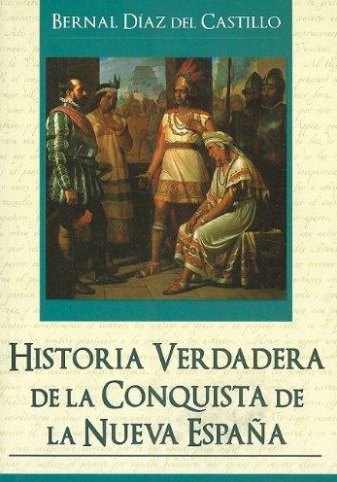 In contrast, the conquistador who knew this woman best, Hernán Cortés, mentions doña Marina just twice in his letters to the King of Spain. Her appearance in the Second Letter has become the most famous. Here he describes her not by name but as “La Lengua…que es una India de esta tierra” (The Tongue, the translator…who is an Indian woman of this land).

Some observers question the fairness of calling Malinche a traitor, and passing judgment on her relationship with Cortés and the Spanish conquest of Mexico, pointing out that being sold as a slave, getting into that relationship was clearly not a personal decision.

No matter how one chooses to interpret her role, the historic encounter of two separate worlds and the subsequent birth of a new nation seem to revolve around the figure of Malintzin, Malinche, or Doña Marina.

If you want to know more about this underestimated and at the same time fascinating character of the history of Mexico, you can check out some of the books mentioned in the bibliography below: 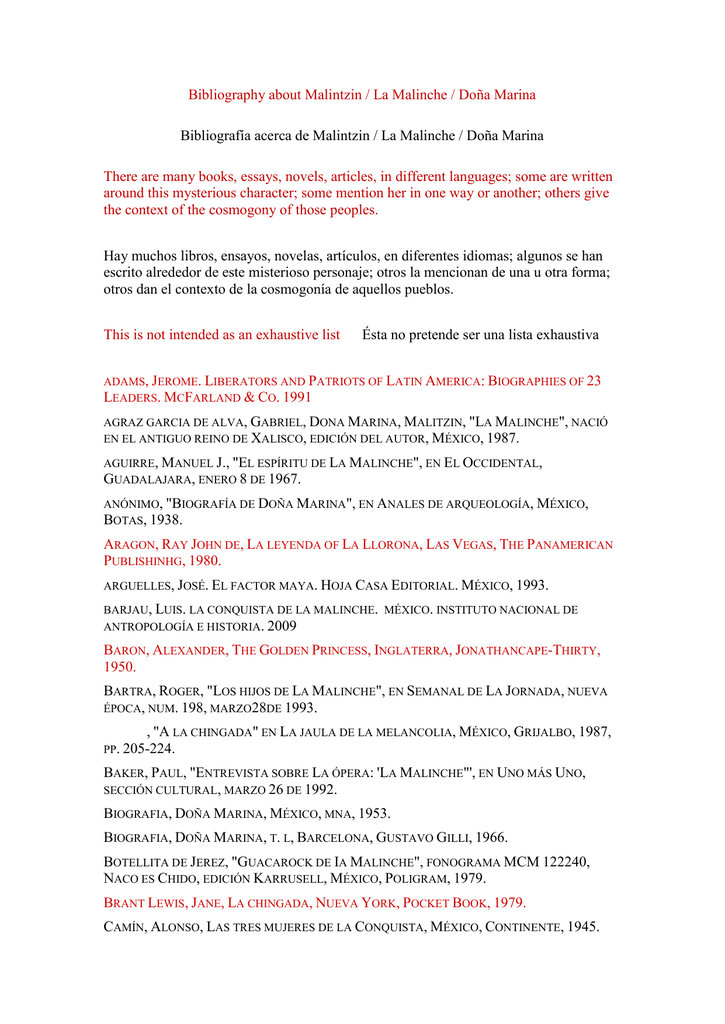