At least 14 skeletons of woolly mammoths have been discovered in Mexico in pits apparently built by human hunters to trap and kill the huge animals some 15,000 years ago, according to Mexico’s National Institute of Anthropology and History.

The discovery “represents a watershed, a touchstone on what we imagined until now was the interaction of hunter-gatherer bands with these enormous herbivores,” Pedro Francisco Sánchez Nava, national coordinator of archaeology at INAH, told reporters on Wednesday.

The skeletons were found in Tultepec, about 25 miles north of Mexico City, in clay that had once been at the bottom of Lake Xaltocan.

Archaeologist Luis Cordoba Barradas, of INAH’s Directorate of Archaeological Rescue, said the discovery offers a more complex and complete concept of how mammoth hunts were carried out.

Archaeologists suggested that the clay area had opened up as the lake receded during the era of mammoths, providing hunters with a site easier to dig up to create traps. 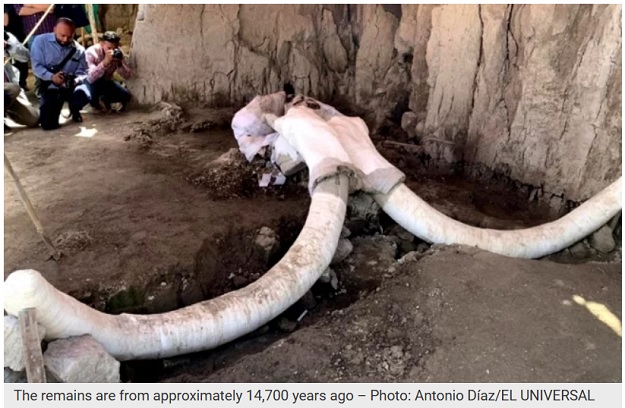 Cordoba Barradas, who led the team, said the finding suggests that groups of between 20 and 30 hunters swept a herd of mammoths with torches and branches to divert some of the animals into the traps. Once there, they were killed and their carcasses cut up.

“There was little evidence before that hunters attacked mammoths. It was thought they frightened them into getting stuck in swamps and then waited for them to die,” he told reporters Wednesday. “This is evidence of direct attacks on mammoths. In Tultepec we can see there was the intention to hunt and make use of the mammoths.”

He said an important clue was the vertical cuts in the earth where the bones were found, indicating the pit had been dug by humans.

Cordoba Barradas said one skull had what appeared to be a long term fracture, indicating that hunters may have battled that particular mammoth for years. He said the way the bones were ritually displayed indicated that the hunters “had to consider him brave, fierce, and showed him his respect in this way.”

While the 14 mammoths found at the site are far less than the hundred-plus found at sites in northern and eastern Europe, the discovery qualifies Tultepec to be listed as a Mammoth Megasites.