By Yucatan Times on November 11, 2019
The Mexican government will auction seized goods for at least MXN $32.5 million today, in order to raise funds for children’s music bands from the state of Oaxaca.

Ricardo Rodríguez, the head of the SAE, announced that the auction will take place at Los Pinos and that it will include 24 luxury vehicles, 2 ships, 10 watches, 6 homes, and more seized goods.

According to Ricardo Rodríguez, this auction will also celebrate that the name change for the SAE has been approved and now it will be called the “Institute to Return Mexicans What Was Stolen.”

El Chapo’s homes are up for sale

Among the homes to be auctioned today, six of them belonged to Joaquín “El Chapo” Guzmán, moreover, one of the homes once belonged to Griselda López, his ex-wife and the mother of Ovidio Guzmán, whose failed arrest wreaked havoc in Culiacán on October 17.

The homes were used by the leader of the Sinaloa Cartel to hide and prevent his arrest and extradition.

The homes are priced between MXN $2 million and MXN $11.2 million. 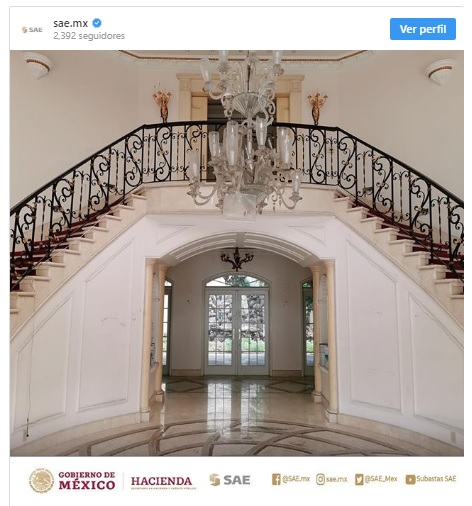 Mexico’s state-owned oil company will sell two Cessna Citation airplanes, previously used by high-ranking officials as part of its asset disposal program.The airplanes were purchased for USD $20,180,900 million.
Pemex’s Administrative Board approved the auction of both airplanes on October 8.

The Yucatan Times Newsroom with information from SAE