Today the urn is located next to the main altar of the temple of the Hospital de Jesús, on the corner of Pino Suárez and the Republic of El Salvador, where just 500 years ago he would have met the Mexica emperor Moctezuma II. 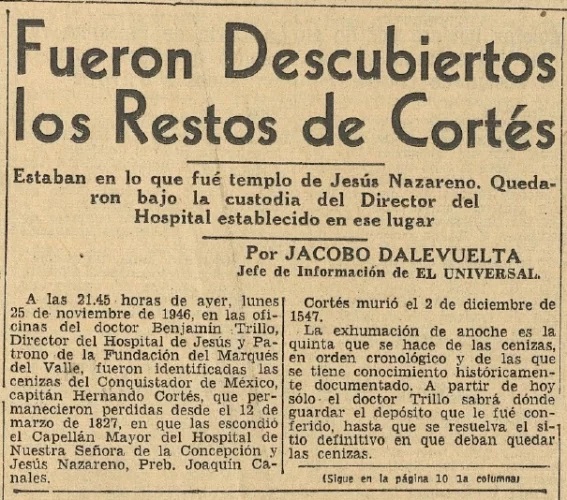 CDMX (Milenio) – The “rediscovery” of the remains of Hernán Cortés de Monroy y Pizarro Altamirano in 1946 was world news. Multiple journalistic publications appeared, amongst them Life magazine, giving the news of the “finding” of the urn in a temple located next to the Hospital de Jesus, the first hospital founded in the “New Spain”, whose construction began in 1601.

Once again Hernán Cortés is on everyone’s lips, especially leftist politicians, who suggested to López Obrador that the Spaniards should take back his remains, calling them “a fucking source of infection”. It becomes relevant, since next Thursday, November 28, it will be 73 years since the penultimate exhumation of Captain Hernán Cortés de Monroy y Pizarro Altamirano –the last one was in charge of the National Institute of Anthropology and History (INAH)– a year later.

The story that caused a stir was the alleged discovery of Cortés’ urn in 1946, in the Church of Jesus of Nazareth in Mexico City, but how did this date come about?

The conqueror died in Castilleja de la Cuesta, on December 2, 1547, originally, was buried in Seville, and 11 years later moved to another place. Although in his will he stated that he wanted to be buried in Mexican lands, especially in a Franciscan monastery, that Cortés descendants had to found.

In 1566 the remains of “Don Hernando” arrived in Mexico, and since the San Francisco monatery he had ordered had not yet been built, they were provisionally deposited in the church of San Francisco de Texcoco. In 1629 once again, his remains were exhumed to move them to Mexico City. In 1794 Viceroy Count of Revillagigedo commissioned sculptor Manuel Tolsá to make a bust for Cortés tumb, inside the Hospital de Jesus.

Berenice Bravo, a full-time researcher at the National School of Anthropology and History (ENAH), explains that “because of the Independence movement and the anti-Spanish sentiment, it was feared that the remains were threatened, so they were hidden”.

In order to avoid any attack, Lucas Alamán made the decision to give Cortés remains to the Spanish embassy in Mexico, and his descendants, a copy of the document indicating the exact location.

In 1823 the Mexican political class chose to present Cortés as a villain, not even the texts of Carlos de Sigüenza and Góngora that highlighted his philanthropic work, such as the hospital foundations. His urn was moved to the church of Santo Domingo, and in 1827 he returned to the Hospital de Jesús.

For years, there were many who dedicated themselves to look for the exact place where Cortés human remains were located, such as Fernando Baeza, who announced the exact place on November 28, 1946, accompanied by historians Manuel Moreno and Alberto María Carreño.

To put an end to the controversy, a decree was issued establishing that the INAH would not only take charge of the urn, it would also have the responsibility of conforming its authenticity.

According to journalistic chronicles from the time, Dr. Trillo, the benefactor of the hospital, delivered the urn. The INAH investigators found inside a metal tube with the original document that certified its authenticity.

Today Hernán Cortés lays next to the main altar of the temple of the Hospital de Jesús –with a plaque that identifies its remains– in the corner of Pino Suárez and República de El Salvador, where 500 years ago the Spanish conquistador would meet for the first time with the Mexica emperor Moctezuma II.

The remains, “a source of infection”.
MORENA congressman Charlie Valentino León Flores Vera said that the remains of the founder of  the “New Spain” are a source of infection, so he suggested Andrés Manuel López Obrador, to send Cortés remains back to Spain: “Mexico is embarrassed and ashamed, so I would suggest that you take out that crap, that fucking source of infection that only makes us sick”. (SIC) The legislator’s position became viral on social networks.

500 years have past since the meeting of Hernán Cortés and Moctezuma, and 472 years since the conqueror´s death and his name still remains as a sensitive subject.