Catrina: Mexico’s Lady of the Dead

All over Mexico, people can find curious skeleton figures of porcelain or ceramic, hand painted or covered in the Huichol style of colorful microbeads. “What are these?” I am often asked, and, “What do they mean in the Mexican culture?”

These are Catrinas, created by various artists and inspired by the works of Mexican printmaker, cartoon illustrator and lithographer, José Guadalupe Posada (1852-1913). He created a zinc etching called La Calavera Catrina around 1910-1913 as a satirical image originally aimed to mock the indigenous Mexicans who imitated European aristocratic traditions during the pre-revolution era of president Porfirio Diaz. La Calavera Catrina has since become an icon of the Mexican Día de los Muertos, or Day of the Dead, celebrations. 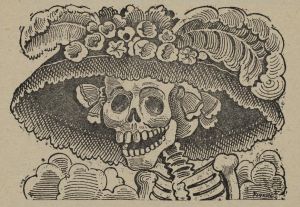 In his broad and varied work, Posada portrayed beliefs, daily lifestyles of popular groups, the abuses of government and the exploitation of the common people, many in the form of skulls. Some of his figures were almost recognizable as real people based on the details of his work.

La Calavera Catrina represents a person who was ashamed of her indigenous origins and dressed imitating the French style while wearing a large feathered hat and lots of makeup to make her skin look whiter. She also symbolizes the contrasts between the upper and lower classes, for times were cruel. The social classes were extremely segmented and the highest class was the most fortunate, enjoying many privileges, in contrast to the lower classes who were nearly invisible.

Her popularity increased due to a work by artist Diego Rivera in his 1947 mural “Dream of a Sunday Afternoon Along Central Alameda.” Rivera took inspiration from the original etching and gave her a body as well as more of an identity in her elegant outfit as she is poised between himself and Posada. The intent seemed to be to show the tradition of welcoming and comfort the Mexicans have with death and especially the identity of a Lady of the Dead, based on the Aztec goddess Mictecacihuatl, who was keeper of the bones in the underworld, while presiding over the ancient month-long Aztec festivals honoring the dead.

La Calavera Catrina today can be found in her more traditional form, both in drawn works as well as sculptures made out of Oaxacan wood carvings, papier-mâché sculptures, majolica pottery, and black clay figurines.

If you want to read more about art and culture from my travels, click HERE. If you are in Puerto Vallarta and would like to take a walking tour with me to visit some of the shops that carry Catrinas and other interesting cultural icons, click HERE. 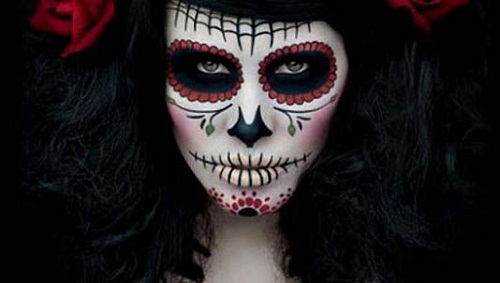 Sandra Cesca has traveled the world, but found herself returning to Mexico more and more. She moved to Puerto Vallarta in 2008 and never looked back. She currently offers eight different Puerto Vallarta Walking Tours, which include history, architecture, culture, artisanal crafts and ecology. Her photos and articles can be found on puertovallartawalkingtours.com; yourculturalinsider.com; sandracescaphotography.com; Instagram and Facebook. She can be contacted at sandra.learn.vallarta(at)gmail.com; or sandra.cesca.photography(at)gmail.com.