Mérida, Yucatán. Nov. 8.- AMLO’s trip to Yucatan began anecdotally with the request of Captain Rafael Bolio, pilot of Aeromexico, who welcomed President Andrés Manuel López Obrador and told him on the speaker that hopefully somebody can convince him to reconsider, and build the Mexico City airport in Texcoco. Request that several of the passengers on the plane applauded cheerfully.

Later on, amid shouts, shoves and some blows, the president of Mexico, Andrés Manuel López Obrador, arrived at the International Airport of Mérida, where hundreds of people were waiting for him trying to hand out petitions and documents.

The president arrived on Aeromexico flight 533 on a two day visit to Yucatan, as part of a working tour to address issues related to the indigenous population of the Yucatan Peninsula.

During his visit to Tekax, in the south of Yucatán, where he led the event called “Dialogue with Indigenous Communities”, president Andrés Manuel López Obrador announced that Tekax General Hospital will be 100% enabled, to provide medical attention to 250,000 people in the area, whose tentative opening date will be January 15, 2020. 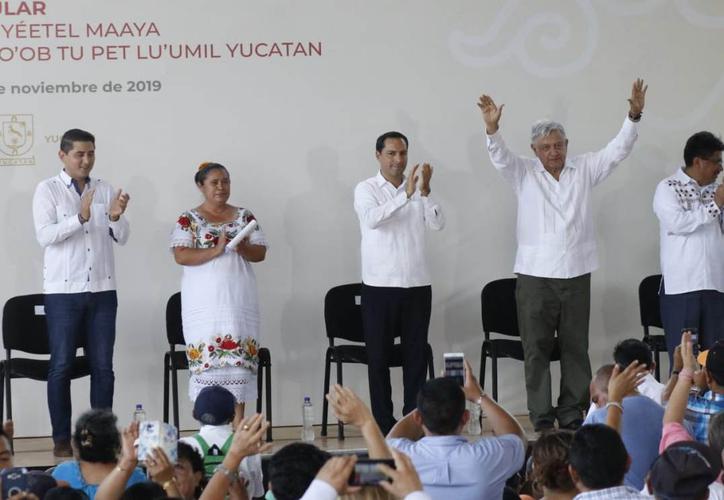 “We are going to hire 437 new people, of those 101 are going to be doctors, 167 nurses, and 169 diagnostic staff for five different specialties,” said the director of the Institute of Health for Welfare, Juan Ferrer Aguilar, who was present at the event.

As part of his visit to the state of Yucatan, López Obrador participated in a Maya ceremony in which he showed great respect for indigenous traditions, and joined the ritual that was celebrated entirely in the Mayan language.

Representatives of the indigenous communities of the region spoke during the event mentioning that roads need to be restored, and urgently demanding help from the municipal, state and federal governments, stating that the Maya indigenous peoples are worried about losing their only patrimony; and that they are concerned about the Maya Train, as they do not know if such a project puts in risk their property.

Beekeepers of the region also asked for AMLO’s help to stop farmers from using pesticides that are significantly harmful for their beehives.

In a fact worth highlighting, state governor Mauricio Vila Dosal and the Mexican president listened to the national anthem in the Mayan language for the first time in history.